Bishop Makarios visits the Eritrean Community in the UK 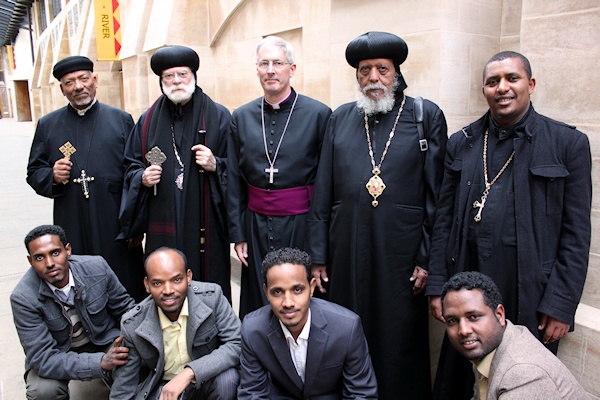 During a visit to the clergy and faithful of the new Eritrean Orthodox Diocese of Europe in the UK, His Grace met with Abba Seraphim in London. On 12 June following pastoral visits to his communities in Manchester and Birmingham, Bishop Makarios was greeted at Euston Station by Abba Seraphim who accompanied him to Southwark Cathedral, where they were welcomed by the Bishop of Southwark (The Right Rev’d Christopher Chessum). Accompanying Bishop Makarios were Father Teklemariam (Frankfurt) the likekahnat (hegumen) of the European diocese, Father Habtom Ftuwi (Manchester), Deacon John Gebrehewit (Manchester), Deacon Teklit Eyob (London), Deacon Habtom Tesfahuney (Birmingham) and Deacon Robel Fessahaye (Birmingham). After showing them some of the highlights of Southwark Cathedral, Bishop Christopher entertained his visitors to tea and discussed the issues related to the current situation of Christians in Eritrea. After an exchange of gifts, prayers were said for Eritrea and especially Patriarch Antonios in his imprisonment. The two bishops and their party joined Bishop Christopher at Choral Evensong, which was led by Canon Paul Saunders, the Sub-Deacon & Canon Pastor.

In the evening Abba Seraphim entertained Bishop Makarios and his clergy to supper at the Church Secretariat at Charlton, where they were joined by Subdeacon Daniel Malyon and James Carr. Bishop Makarios stayed overnight at the Secretariat. 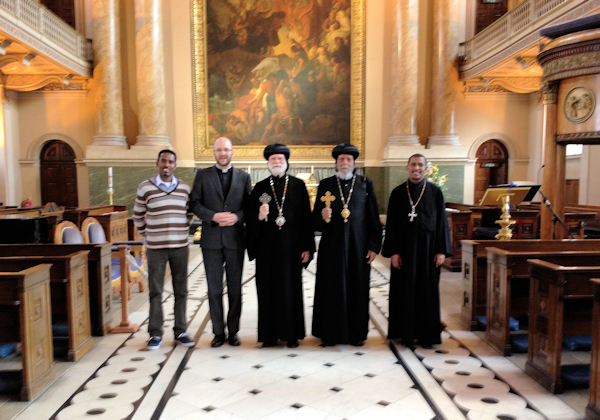 On 13 June Abba Seraphim and Bishop Makarios and his party visited the Old Naval College at Greenwich, where they viewed the Painted Hall and the Chapel and were received by the Rev’d Jeremy Frost, the chaplain. In the afternoon they visited St. John’s Church, Walham Green, Fulham, where they were welcomed by Father Mark Osborne, the priest-in-charge. On Saturday, 16 June Bishop Makarios will inaugurate Eritrean Orthodox worship in this church with a service commemorating Eritreans who have died in recent wars.

Bishop Makarios’s visit followed his attendance at recent meetings of the Holy Synod in Cairo where he was recognised as the sole canonical representative of the Eritrean diaspora rather than the government controlled hierarchy in Asmara.