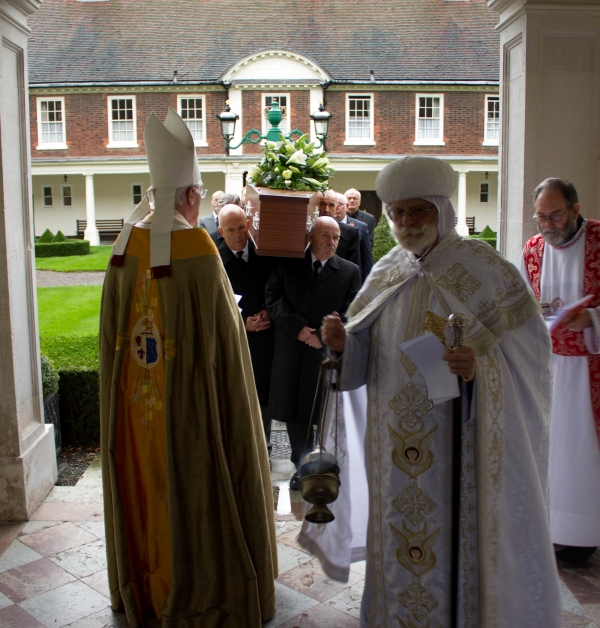 The funeral of Father Michael Robson took place on 3 November following the celebration of the Divine Liturgy in the chapel of Morden College, Blackheath, where he had lived and died. Abba Seraphim was the celebrant, assisted by Father Peter Farrington (who delivered the homily) and Subdeacons Michael Kennedy, Antony-Paul Holland and Trevor-James Maskery. Also participating was The Right Rev’d Michael Colclough (formerly Bishop of Kensington) as assistant chaplain to Morden College. Bishop Michael was with Father Michael when he died and had said the Prayers of Commendation at his passing. Mourners included Father Michael’s family, many who had travelled up from the West Country; friends, members of the Orthodox Church and other residents of Morden College. 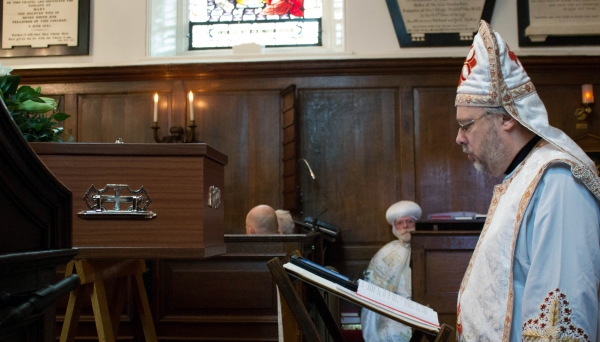 In his address Father Peter drew on St. Paul’s words to the Corinthians (1 Cor. I: 25-29) about how God uses the foolish things of the world to confound the wise.

“Father Michael Robson was my parish priest. He passed away two weeks ago while I was away from home, engaged in ministry in Italy. The last time I saw him was at the regular Liturgy we have been celebrating at Morden College, where he had been living for the past 14 or 15 years. He had been looking increasingly frail over the last year or so, yet seemed most alert during the liturgical prayers which had formed so much the focus of his own spiritual life.

In 1994 I became Orthodox, and a few of us began to pray together in Maidstone. When the opportunity came to use the Chapel at the Maidstone Cemetery, Father Michael began to celebrate the Liturgy with us, and for 15 years or so he served as the priest of our Community of St Alban, worshipping first in Maidstone at the Cemetery Chapel, and then in our own little church of St Alban in Chatham.

Nearly six years ago, after many years of faithful service as a priest, Father Michael became suddenly very ill, and almost entirely debilitated overnight. I remember the last time that he stood at the altar in our little Church of St Alban, being supported by myself and Subdeacon Michael Kennedy. It was too much for him even to hold the chalice. Yet even in the last years of his life he would remember family and friends by name and ask after them. He continued to show that pastors care as far as his condition allowed him. He never ceased to be a priest, becoming most alert during times of prayer and worship.

What should we say? From a worldly point of view he had failed to become a priest until well advanced in age, and then had to retire from an active service during the last years of his life. Everything about him seemed to represent weakness according to the values of the world as St Paul writes. Yet he was manifestly used by God in ways that he had not expected or imagined.