Stand in Solidarity for Iraqi Christians 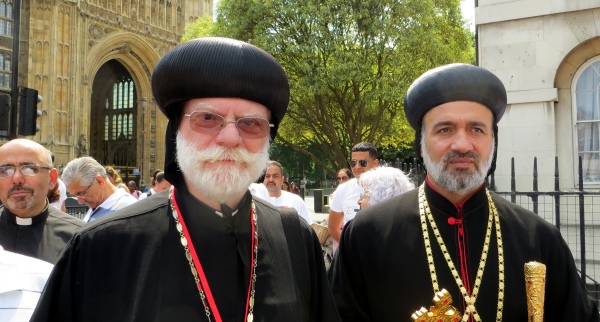 Following reports of the threats against Christians in the Northern Iraqi city of Mosul, which has led to their flight from a city with a continuous Christian presence for more than 1,600 years; the Iraqui Christian community in the UK organised a demonstration outside Parliament on 26 July. Among its leaders were His Eminence Archbishop Mar Athanasius Touma, Syriac Orthodox Patriarchal Vicar for the United Kingdom; Mgr. Nizar Semaan of the Chaldean Catholic Church and Archdeacon Yonan Yonan of the Assyian Church of the East. They were joined by clergy of many other churches, including Abba Seraphim and the Suffragen Bishop of Warwick and some Muslim leaders anxious to stand in solidarity with their suffering brethren. Following similar demonstrations in the Middle East this past week, several Muslim speakers declared, “I am Iraqi, I am Christian” After several speeches addressing the large crowd which filled Old Palace Yard opposite the Victoria Tower at Westminster, the clergy processed to Downing Street, where the leaders presented an appeal for support to the Prime Minister.