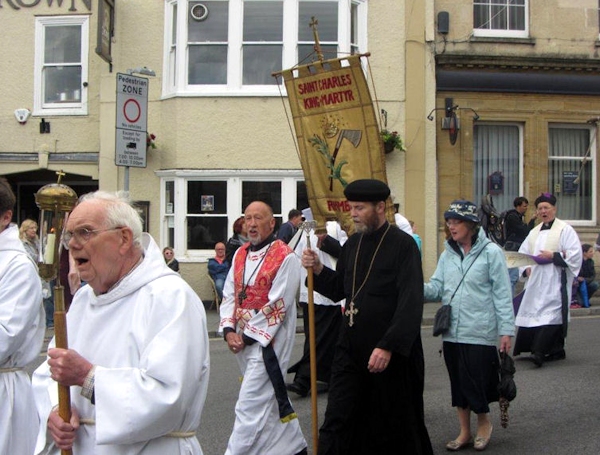 Owing to Father Benedict having to depart straight after the Divine Liturgy Father Simon and Subdeacon Wulfric were the only Orthodox clergy to attend the Solemn Mass of the Blessed Virgin Mary, at which His Grace the Right Reverend John Ford, Bishop of Plymouth and Chairman of the Glastonbury Pilgrimage Association presided. The Bishop of Plymouth publicly expressed his appreciation for Father Benedict having celebrated the Liturgy even though he had been unable to stay for the Mass and also welcomed both British Orthodox clergy, announcing that Father Simon was representing Metropolitan Seraphim and expressing his joy that we could be together for the pilgrimage, united by our common baptism. The homily was preached by His Grace the Right Reverend Michael Langrish, Bishop of Exeter.

The rain which had fallen to some extent during the Divine Liturgy and to a far greater extent during the Solemn Mass held off for the procession through Glastonbury which was largely bathed in sunshine. Come rain or shine, though, it was a joyful day and seemed generally appreciated and valued by all present.