From Theophany to Nativity 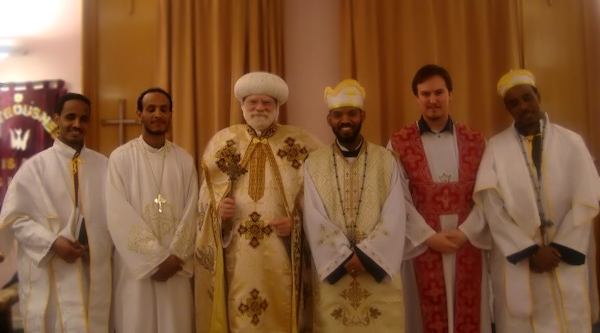 On 6 January Abba Seraphim presided at the Blessing of the Waters and Divine Liturgy at St. Mary & St. Felix Church at Babingley, Norfolk, where he preached on the meaning of the Holy Theophany, one of the seven great feasts of the Church. Having blessed all those present with the newly sanctified water, they afterwards took away bottles of the holy water for use in their homes. That same evening, Abba Seraphim presided at the Nativity Vigil of the canonical Eritrean Orthodox Church (recognising Patriarch Antonios) in London meeting in Archway, Highgate, where he was warmly welcomed by Father Shenouda Haile and his congregation. Also assisting in the sanctuary was Subdeacon Daniel Malyon from the British Orthodox Church. At the conclusion of the Divine Liturgy clergy and people sat together to enjoy a festive meal and Abba Seraphim blessed two birthday cakes as well as the traditional  enjera,  hambasha and wat.