On Friday 4th November Father Simon travelled to Manchester in order to celebrate the Divine Liturgy on Saturday 5th November with the Eritrean Tewahedo Orthodox Church of Christ the Saviour who currently have no priest and are dependent on visiting clergy so they can enjoy the occasional Liturgy from time to time.  And enjoy is very much the right word for this Eritrean congregation who approached the holy communion in such devoutness and celebrated with such joy and enthusiasm.  He was supported by Archdeacon Alexander who travelled from Sheffield on the day, assisted also by the Eritrean deacons present.   The congregation was almost overwhelming in their expressions of appreciation for the visiting British Orthodox clergy. 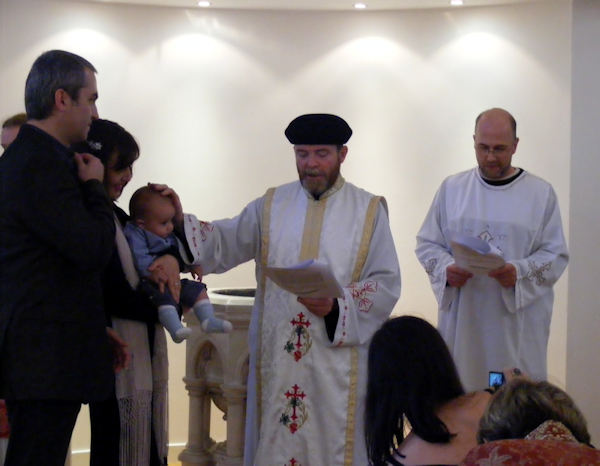 Sunday afternoon 6th November saw Father Simon back in Portsmouth for the baptism of Paul Theodore Maties where he was assisted by Subdeacons Edward Smyth and Nicolae Popu and Reader Daniel Malyon.  The British Orthodox congregation of Saint Mary the Mother of God and Saint Moses the Black was swelled by the many family and friends who came to support young Paul and his parents, Oana and Ovidiu, travelling from Scotland, France, Germany, their native Romania and even from as far as the United States.  It was good to see such wonderful support for a baptism.