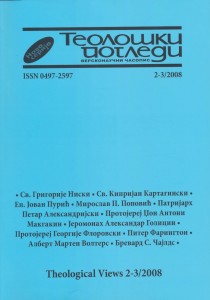 Father Peter Farrington’s article, The Christology of St Severus of Antioch, has been translated and published in the reputable Serbian Orthodox magazine Teološki pogledi (Theological views) which is published by the Holy Synod of bishops of the Serbian Orthodox Church. The article had been reviewed by the editorial board whose members include current Serbian theologians such as His Grace Metropolitan Amfilohije, and His Grace Bishop Atanasije Rakita.

Teološki pogledi has been considering extending their usual content of Eastern Orthodox theological writers to include contributions from the Oriental Orthodox communion, and Father Peter was pleased to have been contacted some little while ago to be asked for his permission to include his article on The Christology of St Severus of Antioch in a future edition. This has now been published and Teološki pogledi and its editor, Father Aleksandar Djakovac, have expressed a desire to continue to publish articles related to Oriental Orthodox Christology.