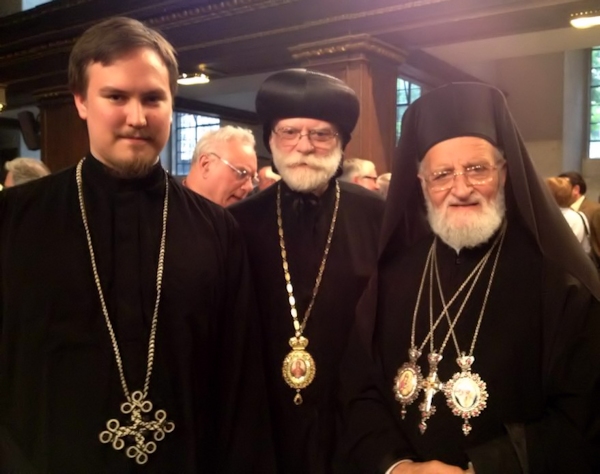 His Beatitude Gregorios III, Melkite Greek Catholic Patriarch of Antioch, was the guest speaker at the annual lecture sponsored by Embrace the Middle East and St. James’s Church, Piccadilly, on 20 May. The title of his address was “Syria: What Hope?” His Beatitude is an engaging and powerful speaker and highlighted the many positive activities and engagements between Christians and Muslims which are the first shoots of the reconciliation process needed to restore the spiritual life of the shattered communities during the destruction and pain of civil war. He Also emphasised that this war is not fundamentally between opposing factions but stirred up by predatory and destructive foreign forces who want nothing short of the destruction of  Syria. The meeting was ably chaired by His Eminence Metropolitan Mor Eustathius Matta Roham, Syrian Orthodox Archbishop of Jazirah & Euprates. Also attending from the Oriental Orthodox tradition were His Eminence Archbishop Mar Athanasius Touma, Syrian Orthodox Patriarchal Vicar for Great Britain; Metropolitan Abba Seraphim and Deacon Daniel Malyon from the British Orthodox Church