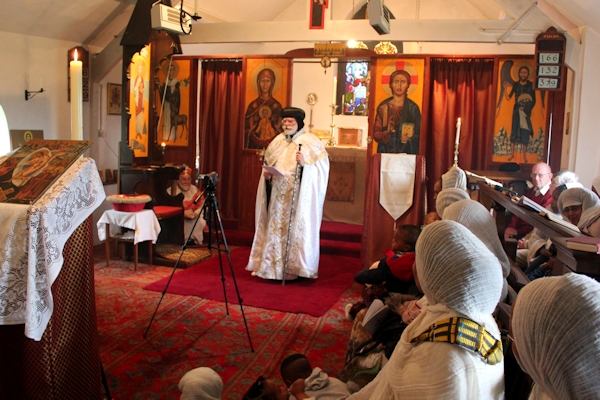 Although the Church in Cusworth Village, near Doncaster, Yorkshire, was opened in 1965, it wasn’t until 1988 that it became Orthodox. It was consecrated by Abba Seraphim on 30 April 1988 and celebrated its Silver Jubilee as an Orthodox Church over the weekend 18-19 May.

The celebration began on Saturday morning with the arrival of Abba Seraphim and the Raising of Morning Incense, during which he spoke about the significance of the Jubilee and the fact that it was not simply looking back, but also looking forward to the future. In addition to Father David Seeds, the parish priest, and Archdeacon Alexander Astill, they were joined by Father Simon Smyth and representatives of the BOC South Coast congregations, Deacon Christopher Barnes representing the Babingley Church, as well as Fathers Habtom Ftuwi, the Eritrean Orthodox priest in Manchester; Fr. Yonas Tesheme, the Eritrean Orthodox priest in Sheffield, along with Eritrean Orthodox faithful; as well as our good friend, Archimandrite Deiniol of the Wales Orthodox Mission and friends from other parts of the country.  Among the many messages of greetings received and read out were those from His Grace Bishop Makarios, overseer of the Eritrean Church in the diaspora, the Catholic Bishop of Hallam and the Anglican Vicar of Doncaster.

After a buffet lunch, traditional Eritrean hymns were sung in Tigrinyan and English in the churchyard and Abba Seraphim gave a talk on “The State of Christians in Ancient Bible Lands”.  The day concluded with the Raising of Evening Incense.

On Sunday, 19 May, Father David Seeds celebrated the special Thanksgiving Liturgy for the Jubilee and Father Simon Smyth preached the homily. 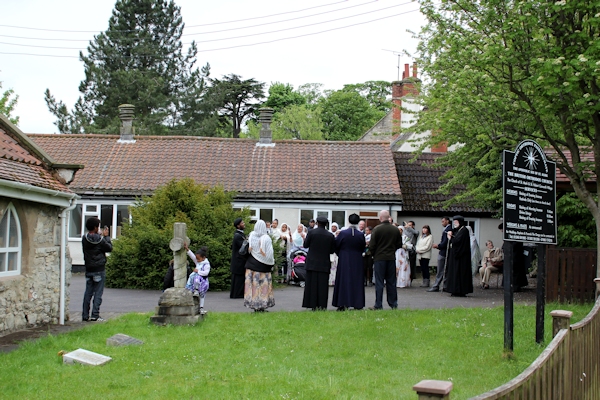