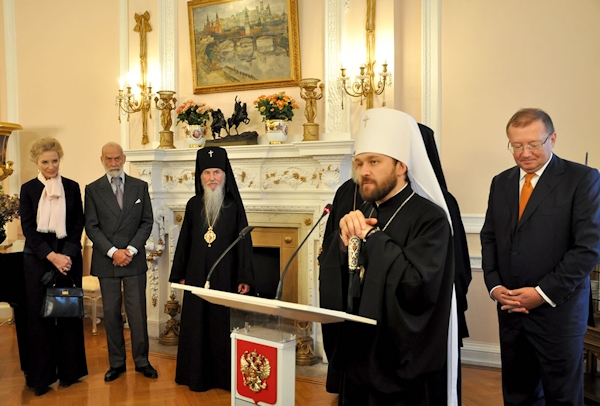 The celebrations of the 50th Anniversary of the Russian Orthodox Diocese of Sourozh was marked with two festive events on 21 October. His Excellency Alexander Yakovenko, Ambassador of the Russian Federation, hosted a Reception at his residence in Kensington Palace Gardens in the afternoon. As this also coincided with the 5th anniversary of the reunification of the Russian Orthodox Church Abroad (ROCOR) and the Moscow Patriarchate, as well as hosting of the Conference of Russian Orthodox Bishops Serving in the Diaspora, a large number of Russian Hierarchs were present. Heading these were Metropolitan Hilarion of Volokolamsk, Chairman for External Church Relations, and Metropolitan Hilarion of Eastern America & New York, Primate of ROCOR.  The gathering was honoured with the presence of Their Royal Highnesses Prince & Princess Michael of Kent as well as ecumenical visitors, including the Apostolic Nuncio (Archbishop Antonio Mennini) and the Archbishop of Westminster. Bishop Athanasius of Tropaion represented the Ecumenical Patriarchate and Abba Seraphim the Oriental Orthodox Churches. 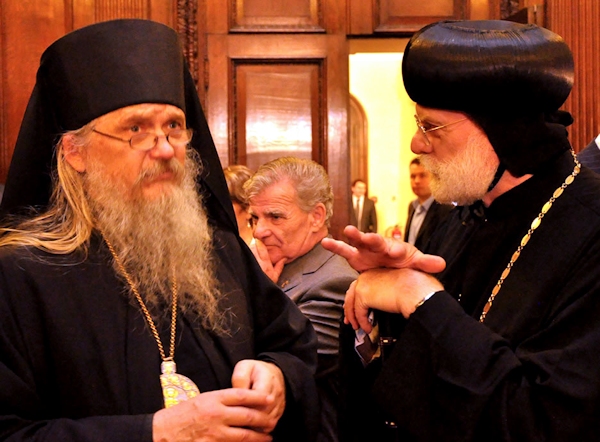 Later in the afternoon, Archbishop Elisey of Sourozh hosted a festive ceremony at Cadogan Hall, Chelsea, where a number of awards were given to clergy and laity in recognition of their service to the diocese followed by a programme of religious, folk and classical music and a preview of Alexey Mikhalev’s documentary film: “Sourozh. Blurring out the boundaries”.