Retirement of Dr. Williams from the See of Canterbury 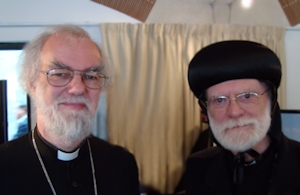 Commenting on the news of the planned retirement of Dr. Rowan Williams as Archbishop of Canterbury, Abba Seraphim said that his scholarly and pastoral qualities would be greatly missed. During his time as Archbishop “he has gained the respect and affection of other Christian communities and has been a firm and dependable friend. Always ready to speak openly on behalf of  suffering Christians in a measured and positive manner, his understanding and sympathy for the spirituality and traditions of Orthodoxy have ensured a warm relationship.” During his primacy, the Church of England and the Anglican Communion have faced many divisive issues, but Dr. Williams has approached them all with unfailing courtesy,  integrity and tolerance. We wish him well in his new distinguished position as Master of  Magdalene College, Cambridge, and hope that we will continue to benefit from his scholarly and insightful writing.