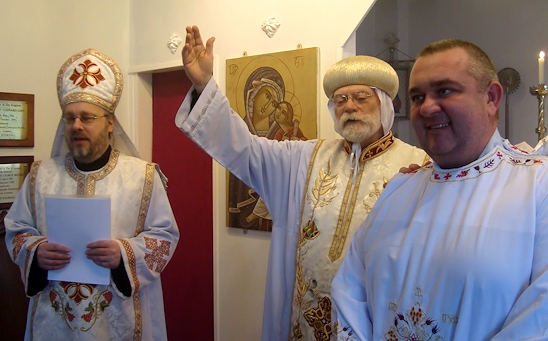 On 8 January Abba Seraphim ordained Roman Ivanovich Benchak to serve as a Reader at St. Athanasios & St. Alban Parish at Chatham. Roman is a Russian who has been worshipping for some time with the British Orthodox and during his homily Abba Seraphim commented that although the Russian Orthodox Church was a relative ‘newcomer’ to Orthodoxy it had made an amazing contribution to the world, with its profound spirituality and great catalogue of saints and martyrs, especially those who had struggled to keep the Orthodox faith alive during a difficult history, from the Tartar Yoke to more recently, the darkness of atheistic communism. What a rich schoolmaster it had proved to bring Roman to Christ. In entering into service in the British Orthodox Church within the Coptic Patriarchate, Roman becomes the ‘firstfruits’ of the full reunion we all long to see between the two families of Orthodoxy and a witness to our common faith and adherence to the same Apostolic Tradition. 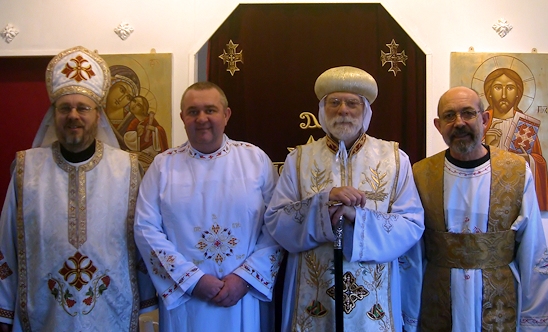 Abba Seraphim noted that today in Stevenage His Grace Bishop Angaelos was holding a special Memorial Service for all the Coptic Christians who have lost their lives – indeed become martyrs – in the recent troubles which preceded and took place during the Revolution: from, El Kosheh, Nag Hammadi, Al-Qidiseen in Alexandria to Maspero. Although unable to be there personally, he had directed all British Orthodox congregations to make similar commemorations and to join in prayer and in spirit with that service. Thankfully this Nativity Feast has passed off in Egypt peacefully but these are still uncertain times. He noted that His Holiness Pope Shenouda had invited representatives of all political parties to join the Christmas celebration; which was right as Christians can show no hate, even for those who have treated them cruelly, especially as the Eucharist is about union with God and the spirit of forgiveness and new life in Christ; so all must be welcome. Yet we do not forget those whose lives have been sacrificed and whose blood is a witness of injustice. At this time we also called for prayer for the Christians of Syria, who are suffering because of the unrest there.