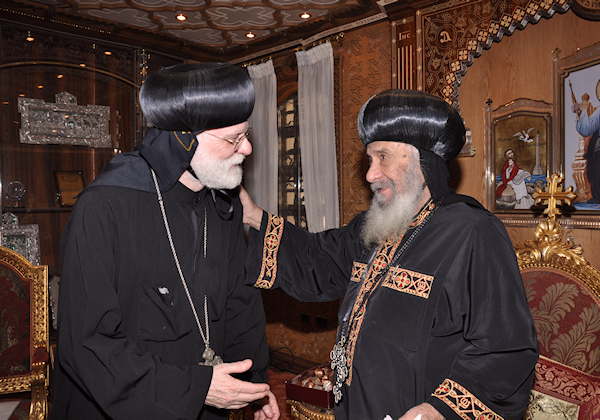 Abba Seraphim visited Egypt from 13-20 October with a small group of ecumenical pilgrims as well as members of the British Orthodox Church. Accompanying Abba Seraphim were Father Simon Smyth and Reader James-Antony Kelly from the Portsmouth parish, Dr. Katherine Mori from the Charlton parish, Dr. Gordon Beamish, James Carr, Daniel Heale, Terence Pearson and Sister Luisa Duffy of Madonna House. Arriving in Cairo on a Wednesday they were able to attend the weekly papal lecture at St. Mark’s Cathedral in Abbesseya and afterwards to greet His Holiness on his return to the papal residence. They were accompanied throughout by Shenouda Mamdouh and his wife, Mary Ezzat.

On 14 October the group travelled to St. Mina’s monastery at Maryut, where there were warmly welcomed by His Grace Bishop Kyrillos and lunched at the monastery. Following this they visited the ancient pilgrimage city of St. Menas, which is one of the seven Unesco World Heritage sites in Egypt. Daniel Heale is preparing a doctoral thesis for the University of Winchester on the conservation of historic Coptic sites, so had a particular interest in its present condition, which the Glastonbury Review previously highlighted (No. 108: July 2003) when the damage caused by rising water levels was causing serious concern. The site of the main altar is now covered by a temporary wooden church and the monks are working closely with the archaeologists and conservationists. Father Thaddeus acted as the party’s guide and invited Abba Seraphim to celebrate the Raising of Evening Incense on this historic spot. After leaving Maryut Abba Seraphim’s party stayed overnight at the Papal Residence at St. Bishoy’s monastery in the Wadi El N’atrun.

On 15 October, after visiting the church and venerating the relics at St. Bishoy’s monastery, the party visited Abba Seraphim’s own monastery, Deir El Surian to take the blessing of the churches and relics. They were received buy His Grace Bishop Mattheos, the Abbot, who sat with the group answering questions about Coptic liturgy and the monastic life. That evening the party returned to Cairo, where they used St. Mark’s Centre at Nasr City as their base.

On 16 October they were joined by Abuna Arsanios Boula and the visited the churches and monasteries of Old Cairo: Deir Abu Saifain and the tomb of the late Abbess Irene; the Hanging Church (Al-Mu‘allaqah), Ben Ezra synagogue, St. Barbara, the Church of SS. Sergius & Bacchus (Abu Sargah),  the Church of SS. Cyrus & John, the Church of the Holy Virgin, the Pot of Basil (Al-‘Adhra Qariyat ar-Rihan) and the Convent of St. George (Deir Mari Girgis), where they were received and entertained to lunch by Mother Kyria. 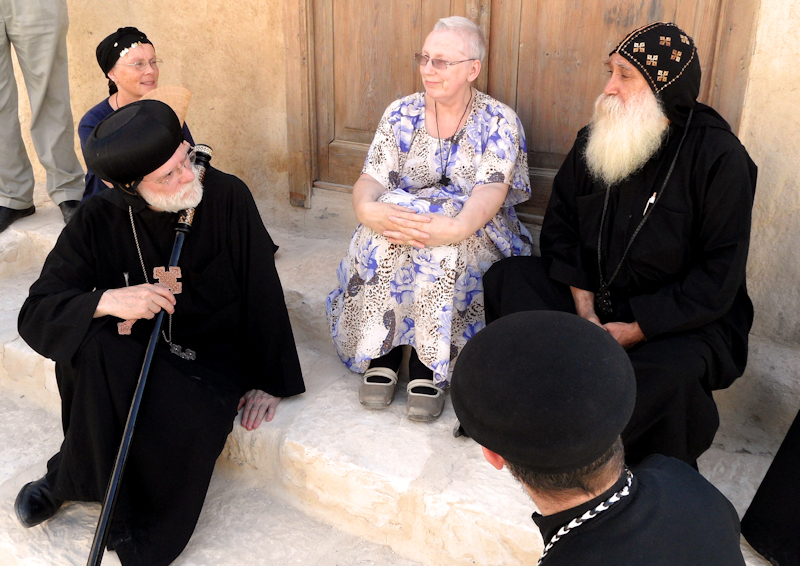 On 17 October they drove to the Red Sea monasteries and were received at St. Antony’s monastery by Abuna Ruwais Antony, who acted as their host during an extensive visit. Following this they travelled on to St. Paul’s monastery, where they stayed the night. The next morning Abba Seraphim, assisted by Abuna Arsanios, celebrated the Divine Liturgy in the underground chapel beside the site of St. Paul’s tomb before the party breakfasted and visit the churches and shrines in the monastery.

On 19 October Abba Seraphim, assisted by Abuna Paul Girguis of St. Mark’s Coptic Orthodox Church, Washington DC, celebrated the Divine Liturgy at St Theodore’s convent (Amir Tadros) in Harat ar-Rum and afterwards were entertained to breakfast by Mother Adrosis, the Abbess. The party then travelled to the Papal Residence at Abbesseya for an audience with His Holiness Pope Shenouda. Following a private meeting with Abba Seraphim, at which he was able to report to the Pope on aspects of the ministry of the British Orthodox Church as well as his visit to the North American Eritrean diocese and to discuss current issues relating to the Coptic Church, they were joined by Bishops Joannes and Ermia, the papal secretaries, and His Holiness warmly received the whole group and discussed aspects of their visit with them. The meeting concluded with His Holiness praying for the whole group and distributing gifts of books and holy ikons.

Before flying back to London on 20 October Abba Seraphim and his party visited Miss Iffa, one of the first deaconesses blessed by Pope Shenouda, at her home in Heliopolis. Although she is now 90, she remains in good spirits and warmly welcomed all her visitors. 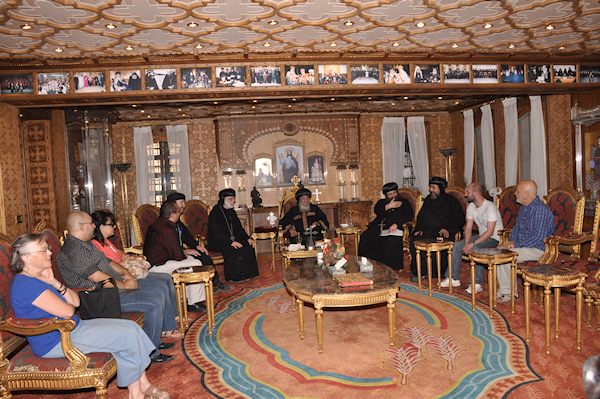