The Bournemouth Church hosted a themed weekend from 24-26 September, which was supported by members of the local congregation as well as members from Portsmouth and Chatham and a catechumen from Hertfordshire. The programme was led by Father Simon Smyth and supported by Father Peter Farrington on the Saturday.

Following vespers on Friday night, the Russian film OCTOB (pronounced Ostrov) or Island, which starts with a monk in a desolated place praying the Jesus Prayer,  followed by a flash back to 1942 and the war, as the story gradually unfolds. It is a story about the human soul which tells of forgiveness, repentance, human hearts and sin, and the confrontation of each of these with the Holy.

Next day, after morning prayer, the second session began with a follow-up to several points raised by the film, including Holy Fools, such as Saint Basil of Moscow, and to show that this was not something restricted to Russian Orthodoxy, mention was also made of Saint Francis of Assisi.  It also focussed on how those who are not called to the monastic life can learn and profit from the example of monks and nuns and live lives of prayer and worship in the world, whilst also earning a living and supporting families. Brief clips were viewed from a film biography of the Scottish footballer Jimmy Johnstone (1944-2006) with colleagues and former players explaining their youthful obsession with the sport and the time and effort they put in being rewarded by the high level of skills they developed.  The parable intended had been that although working people with family commitments might not be expected to put in the hours of prayer one might more reasonably expect from monks, nonetheless the more time and effort that could be put into our spiritual lives the better the spiritual fruit.  It was also noted that these boys had not sat around lamenting that they could be good footballers if only they had a coach to teach them or even a proper football, just as we shouldn’t lament that if only we were monks or nuns or had more time we could become more spiritual. The footballing contribution was nicely balanced with a brief consideration of George Herbert’s seventeenth century poem The Elixir:

Teach me, my God and King,
In all things Thee to see,
And what I do in anything,
To do it as for Thee.

The other two morning sessions were on Prayer and then, specifically, the Jesus Prayer.  Following the Sixth Hour prayer at noon there was a long lunch break allowing time for fellowship and reflection when most of those present went for walks together. 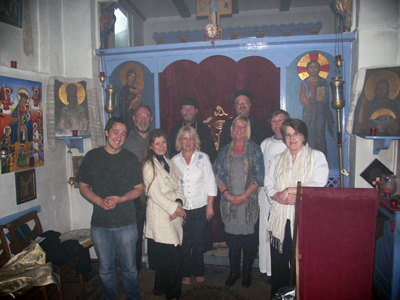 Afternoon Prayer was prayed together at 3 o’clock,  followed by a discussion on Repentance, including a brief Power-Point presentation illustrating repentance, progress and sanctity using JCB excavators, shovels and a microscope. Some of us are like excavators and barely notice the dirt and muck not cleaned away; some have progressed sufficiently to notice the weight of dirt not cleaned off a shovel but others, like the saints on the icons who, like the high powered microscope, were aware of one speck of dirt.  Abba Sisoes was just such a one. At his death when his disciples were exclaiming that he had no sins left to repent from, he answered that he didn’t know if he had even begun to repent.  A lively discussion followed with contributions from everyone which led naturally into considerations of purification and illumination. The final session was on Silence and Stillness and included a handout on Christians striving to live a life of inner silence and prayer in New York. So the discussions came full circle to living an Orthodox spiritual life where we are, here and now. 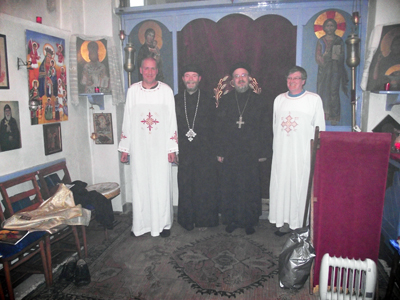 Saturday concluded with Vespers.  During the three different hours of prayer prayed that day the psalms were recited in several ways: either antiphonally around the congregation, each person praying the psalm allocated to them or each person praying simultaneously the psalms allotted to them. This was intended to enable everyone to experience different ways of praying the services so they might choose what worked best for them in their own prayer meetings.

Sunday began with the Divine Liturgy and after lunch the final half hour of the film was viewed (which had been held  back from Friday so as not to spoil the surprise in the story) with its moving ending and the weekend concluded with Afternoon Prayer. The weekend was greatly appreciated by all those present for the opportunities for prayer and reflection and for the hard work by Fr. Simon in planning and organising the talks and discussions.