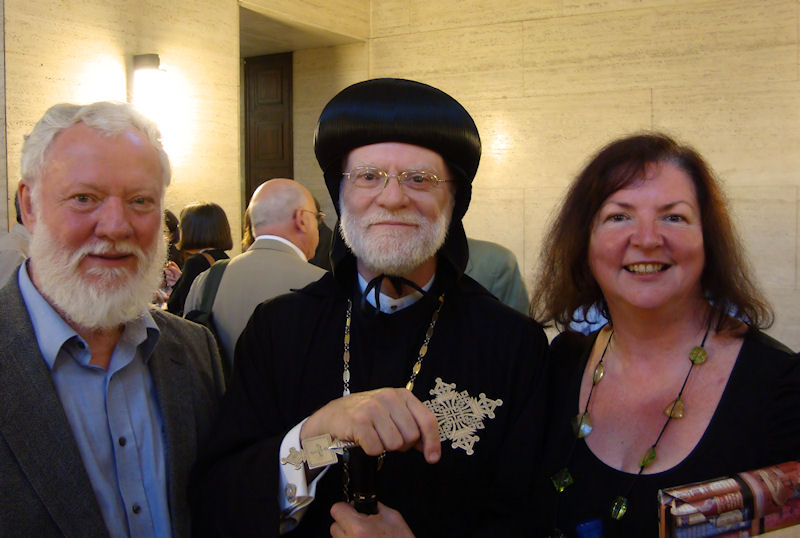 On 22 June 2010 Abba Seraphim, accompanied by Trevor Maskery, joined a packed audience at London University’s Senate House to hear Michelle Brown, Professor of Medieval Manuscript Studies, deliver her inaugural lecture on “Manuscripts from Anglo-Saxon Mercia: the Staffordshire hoard, other recent finds and the ‘new materiality’ in book history”. The lecture’s unwieldy title represented the range of resources (archaeology, stone carving, ancient metalwork as well as manuscripts) which historians now have at their disposal, but with Professor Brown as a dextereous and entertaining guide, the lecture was engaging and instructive. The previously “lost” kingdom of Mercia, whose pagan kings slaughtered their Christian neighbours, now appears to have been the source of many fine manuscripts and to have been been subject to cultural influences from both Europe and the East.

Professor Brown is a respected authority on the early Christian history of Britain and shares her specialist knowledge and enthusiasm generously. Her book, “How Christianity came to Britain and Ireland” (2006) is one of the best introductions to the subject. As a close neighbour to Abba Seraphim, ongoing discussion and debate on these topics have been both edifying and congenial.  Pictured with Abba Seraphim and Professor Brown at the lecture is Canon David Abraham from the Fursey Pilgrims, an ecumenical group dedicated to the study of the life and times of St. Fursey.