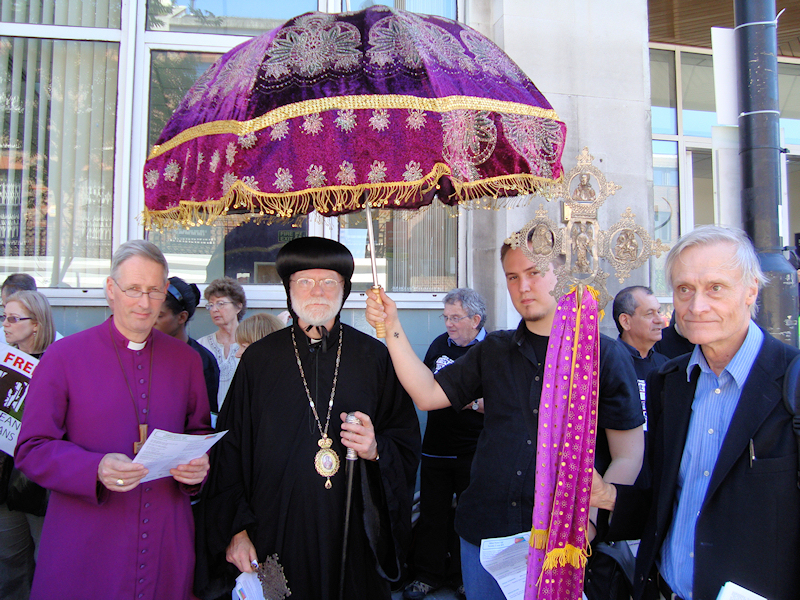 A Prayer Vigil was held outside the Eritrean Embassy in Islington, London, on 3 June 2010 to protest at the treatment of Christians in Eritrea. It was called to mark the eighth anniversary of the closure of minority churches in Eritrea, after which even main-stream churches, like the majority Eritrean Orthodox Church have suffered systematic persecution.

The vigil was organised through the collaboration of a number of groups, including Christian Solidarity Worldwide (CSW), Release Eritrea, Church in Chains, Release (voice of persecuted Christians), Open Doors (serving persecuted Christians Worldwide) and the British Orthodox Church. For an hour on a sunny afternoon in London, a committed group of concerned Christians stood on the pavement opposite the Eritrean Embassy – as cars and buses with intrigued spectators passed by – and prayed, read from the scriptures, sang spiritual songs and heard meditative addresses from those working with and for the suffering Christians in Eritrea, regardless of their religious affiliation. Unlike political demonstrations the tone was calm, reflective and prayerful and there was no hint of invective against the oppressors. Both the Eritrean President and the Ambassador in London were spoken of courteously and prayed for fervently. His Eminence Abba Seraphim spoke of his concerns about His Holiness Abune Antonios, the elderly Eritrean Orthodox Patriarch, who had refused to bow to pressure from the government when the persecuition began and because of his stand for truth and justice found himself deposed from office and placed under house arrest. His position of national importance and his unswerving integity made him a symbol of all who were suffering for their Christian faith. At the conclusion of the vigil Abba Seraphim, supported by The Right Rev’d Christopher Chessun, (Anglican) Bishop of Woolwich and Dr. Berhane Asmelash of Release Eritrea, called at the Embassy to deliver a letter addressed to the Ambassador expressing their concerns and asking for the release of prisoners of conscience. 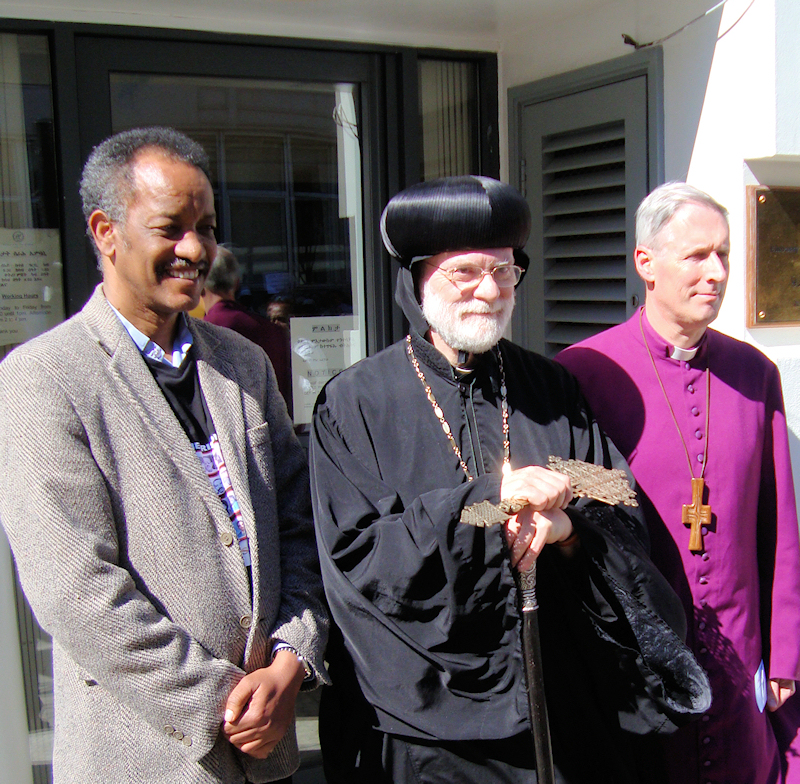 Daniel Malyon (BOC Portsmouth), who was present at the vigil, writes:

Yesterday, in protest of the continuing persecution of our Christian brethren in Eritrea, a number of Human Rights groups and Church representatives attended a vigil outside  the Eritrean embassy in London. It was great to see an event attended by such a variety of people from different cultures and Christian groups. We had people from the Eritrean Orthodox, the British Orthodox, the Anglican Church and independent Churches, all united in prayer and concern for the Christian community in Eritrea.

To have all these groups together representing a single cause is a rarity these days, but was certainly significant. Everyone was involved in the prayer and the speeches, rejoicing in the gifts we recieve through faith, and in the knowledge of our protection, and to show concern for those that are not given the opportunity to rejoice in their faith, for fear that it will cost them their lives.

The readings from Romans certainly set the tone for the vigil, reminding us that whatever we suffer for Christ in life will be repaid in joy after we die. We are reminded that though the Eritrean Christians suffer needlessly and for no real legal reason, they are the martyrs of the modern day, just as Justin Martyr, St Paul and other early Christians suffered for their faith. As Romans 8:18 says “For I reckon that the sufferings of this present time are not worthy to be compared with the glory which shall be revealed in us.”

There was much media coverage on the day from the respresented charity groups, and a lot of focus on Church representation, such as  the support of an Anglican Bishop and HE Metropolitan Seraphim, as to know that the church establishments are supporting them is vital for the people of Eritrea of whom 90% belong to the Eritrean Orthodox Church, a sister Church of the British Orthodox. The Evangelical representatives also spoke of the need for more to be done by the world to prevent single party governments such as Eritrea from arresting political opponents or those that speak for the rights of the persecuted, as freedom of worship and conscience are vital in society.

The vigil continued with  “praise songs” from the Evangelical Church representatives, as well as prayers for both those suffering in Eritrea, and for her government. Some may not understand why we would pray for the opressors of our Eritrean brothers and sisters, but if we do not pray for those  who cause suffering, we are no better than they are, as we would be as uncaring as their actions. At 4pm, after the Charities had finished speaking of the Eritrean situation Abba Seraphim led a deputation to deliver a letter to the Embassy across the road. This was given to one of the staff of the Ambassador, informing him of the reaction of the British public, church organisations and Human Rights groups to the continued opression and imprisonment of Christians in Eritrea.

This event happens yearly in London, and though it has not ended the persecutions in Eritrea, I feel that it is a moral duty to continue to stand beside the people of Eritrea, and let them know that they are still in our prayers and thoughts, for if we lose hope, so wil they.