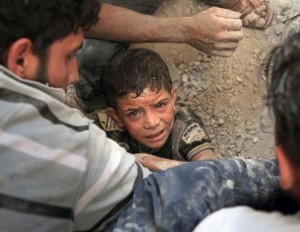 The needs of the suffering people’s of Syria and Iraq are present in the hearts and minds of all of us within the British Orthodox Church, together with a sense of impotence and futility. This was certainly the feeling which was uppermost in the thoughts of Father Peter Farrington this last week as more and more horrendous images were revealed on the internet of the plight of those caught up in so much violence and hatred.

The off-hand comment of a friend provoked Father Peter to consider if there was anything at all which he could do to make even the smallest difference. There was little scope for action, especially in the short-term, but it came to mind that at least he could engage in a 24 hour fast and seek sponsorship from those who shared his concern but needed a small encouragement to act.

With that in mind Father Peter created a campaign on the Just Giving website, which takes care of all of the practicalities, and decided to support the agency Hand in Hand for Syria. This smaller organisation works directly in Syria itself and offers support to those hardest hit by the conflict. It provides medical, food, education, hygiene and community aid.

This was intended to be a very immediate fund-raising activity and it was created on Thursday evening with a view to lasting throughout Friday. With such a short-term focus Father Peter had decided that a fund-raising target of £250 would be challenging enough.

In fact, thanks to the generosity of many donors from around the world, the fund-raising effort was able to generate more than four times that target, and at the end of the 24 hour period of fasting Father Peter was grateful to have received support equaling £1095.

This unexpected amount is already available to Hand in Hand for Syria through the agency of the Just Giving website.

Father Peter says, “I am aware that I have not done very much at all. But this has been an opportunity to allow concerned Christians around the world to find a way of doing something. It is those who have made their own contributions who have achieved something important”.