Baptisms and Marriage at St Albans

It was a great blessing to be able to celebrate two sacraments for Neil and Sue, who have been worshipping with us for some time, and had become catechumens as a mark of the seriousness of their intention to become Orthodox. Although our facilities are limited we were able to conduct the baptism in the Church using an inflatable baptistery, and after Neil and Sue had been received into the Church through immersion and chrismation, their legal marriage was blessed by the Orthodox sacrament of matrimony.

The double celebration was conducted on the 24th April, and Neil and Sue took the names Seraphim and Susanna in the Church. The following Sunday was a further milestone for them, and a blessing for Father Peter, when they received their first communion in the Orthodox Church. 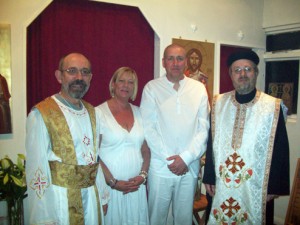 Seraphim and Susanna at their Baptism and Marriage