Our final Sayers Common Liturgy is scheduled for Sunday 27th June: Matins (9.30) & Divine Liturgy (10.15).  The decision to close the Sayers Common mission has not been taken without any regret and reflects a situation in which in terms of our limited resources we have over-stretched ourselves or ‘spread ourselves too thinly’ in taking this on and attempting to sustain it these past two years.

The Festival includes a con-celebrated liturgy in which clergy of all of the member churches of the Oriental Orthodox community participate. A buffet lunch follows, made up of contributions brought by all of the participants at the festival, and the festival concludes with contributions from various Orthodox communities, which may include choirs performing hymns and songs from the various Orthodox traditions represented, and one or more short talks by some of the clergy.

The festival is an important opportunity for the various communities of the Oriental Orthodox communion in the UK to meet together to express our unity in the Orthodox Church, and to develop bonds of friendship and fellowship. It is important that as many clergy and people attend as possible to make the festival a success. 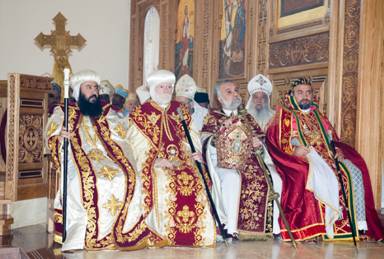 The Palm Sunday worship was as wonderfully Biblical as ever with Gospel after Gospel reading, thirteen in Morning Incense and four in the Liturgy, each preceded by verses from the psalms, and then a reading from Acts and two from the epistles – but this wasn’t going to be enough for people this year… they wanted more.  Not even the prospect of all those readings Holy Thursday evening and Good Friday was going to satisfy folk this year – they had decided they wanted the whole Holy Week readings in their entirety, the readings for every day.  So different versions of the Holy Week services were prepared: 1st, 3rd & 6th hours combined into one service for each morning and 9th & 11th hours combined into an afternoon service.  Two versions of the evening services were prepared, one with all five services combined for the isolated individuals in Bournemouth and Southampton who wanted them and a slightly different version for the Portsmouth mission with the priest leading the first hour of the evening, followed by a combined service made up from the remaining four hours.  So in Bournemouth, Southampton and Portsmouth all the readings for Holy Week were read by those who had the time and energy to allow this with the Thursday, Friday and Saturday services available as in previous years.  It was an attempt to provide something for everyone.  Some took everything available while others of us managed what we could – and some could only be there on Pascha night itself.  All were able to experience something and all seemed to get something out of it – the thanks of one person who was only able to be there for the very night of nights, Holy Pascha itself, though so briefly expressed was also so profoundly expressed that it nearly moved this unworthy priest to tears.  As for others’ experience of Holy Week 2010, I think it best to let them express themselves in their own words…

“I enjoyed the services over Holy Week very much and found myself appreciating the meaningfulness of all the words and actions in the service more and more. I honestly feel that they have helped to both broaden and deepen the understanding of our faith…”

“I just thought I would email you to express how touched I was by the Good Friday service and spending Thursday evening in Prayer at the church. The Paschal Hymn was especially moving for me, with its many prayers, Kyrie Eleisons and the rhythmic chanting… This seemed especially powerful with all of us bowing, the sense of community was very powerful…  The part of the service that reached me the most was the many mentions of the penetant thief…. as one of the only people to defend Christ whilst many were jeering was this man. Even when his disciples had fled, this thief remarked on how ashamed he was that Christ is dying with him though he was the criminal and all Christ had done was attempt to give salvation. For this realisation of Christ alone the Thief was granted salvation, which is probably, to me, the most moving part at all… As well as this I was moved by the way in which the service was conducted, with all 4 Gospel accounts being read for each event. This shows how well this event was witnessed and the detailed knowledge known of the account. The way in which the day moves with this also added to the feeling, with the candles being cut between the 6th and 9th hours, and the change of Icons. I feel it set the mood in the Church and made an impact…”

“the lovely time we had and how we enjoyed every minute of it, and most of all Saturday morning and night it was all so perfect. I look forward to every year coming”

“This Pascha season has been an amazing experience for me… It has been a most prayerful period.  I have felt so close to Jesus…”

Another, whose email I have mislaid, expressed the sense of travelling with our Lord through the events of Holy Week in the readings of the hours through each of the days of Holy Week, of really entering into the events…

Finally: “Wasn’t it wonderful to have so many new faces with us on the journey… The Bishop’s visit seemed to cement in place all the parts we had, what a great day!”

Thank you to everyone who either expressed themselves by email or who said a moving thank you at Holy Pascha.  If you have been blessed by this then that is all I can ask.

In terms of more mundane statistics, numbers were up at every service on every day – but clearly as the sample above indicates there was a prayerful enthusiasm as well as mere numbers.  I think we settled for “Christ is Risen!” in three languages Saturday night, English, Greek and Romanian, but when joined by some Russian Orthodox on Sunday morning we added Church Slavonic as well. 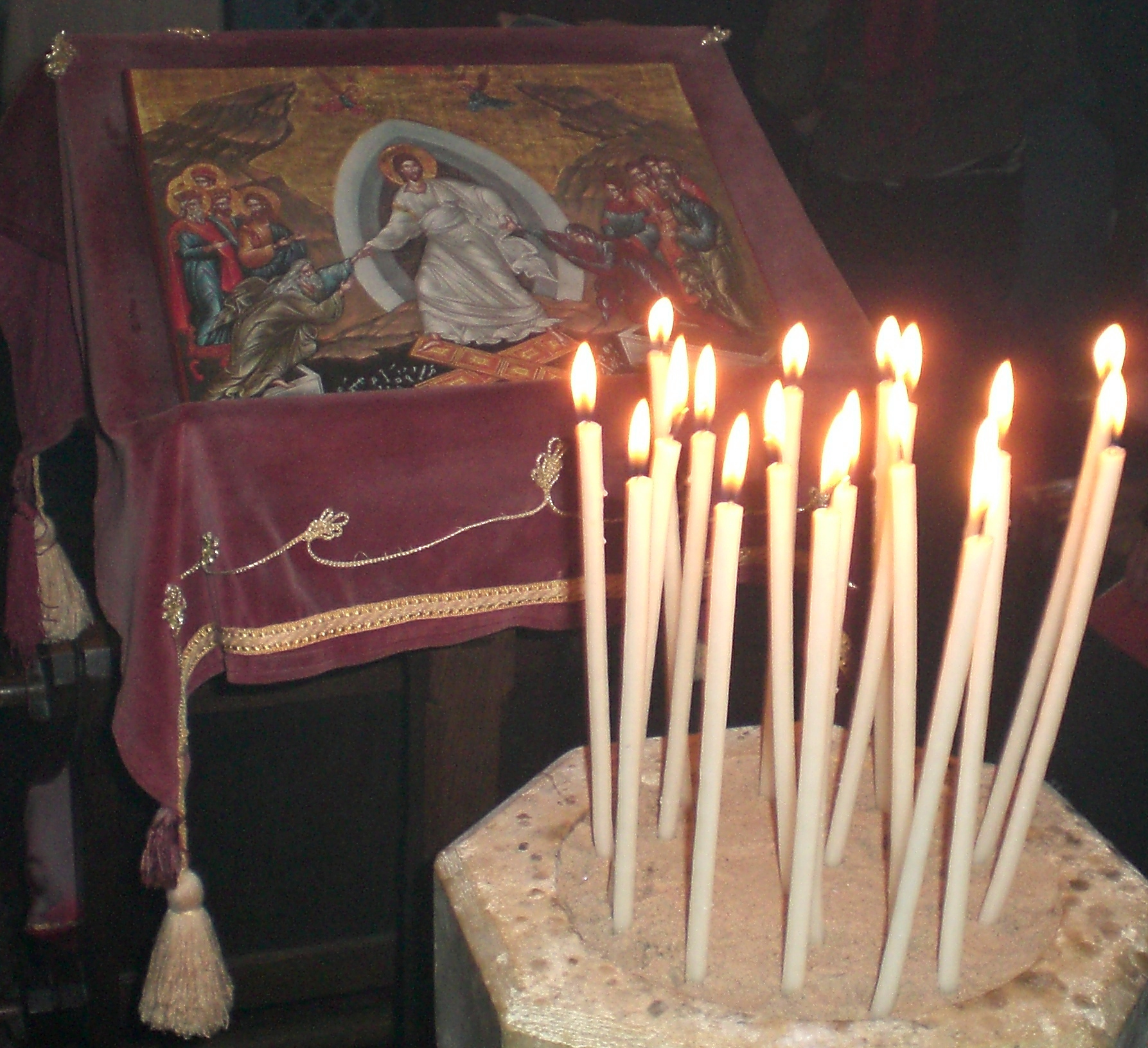 The Church building was in its usual state of happy chaos on Pascha morning – a touch of the morning after the night before!  We made a (brief) attempt at tidying up and then it was time for the Memorial Service, praying in the Light and Glory of the Resurrection, as symbolised by the open altar curtain, for our beloved departed, especially those whose earthly remains are either at Church or in the nearby Wimborne Road cemetery. 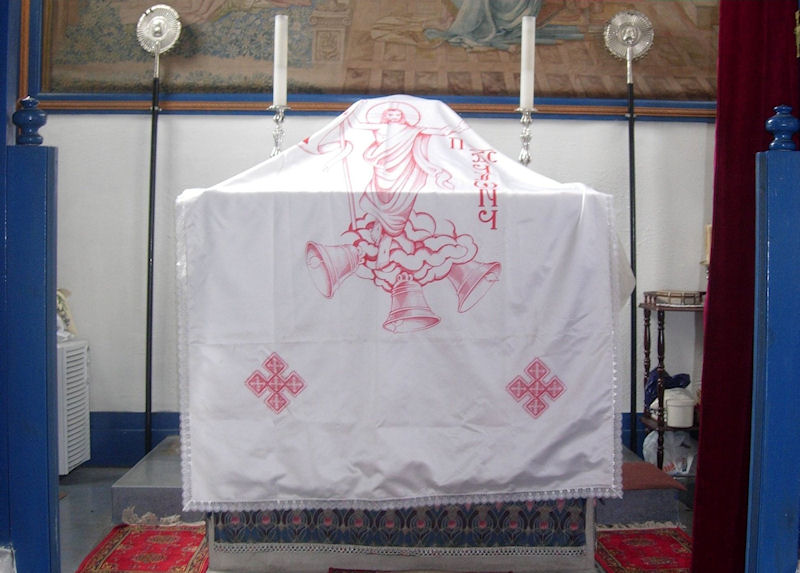 We were joined on Sunday by some third and fourth generation Church members, including with them young Ivan Browne.  It was Ivan who placed the red paschal egg on each grave at which we prayed, including among them some of his departed relatives, great aunts and uncles, great grandmother Rosie Kryworuczka and great, great grandparents Walter and Flora Peckham. 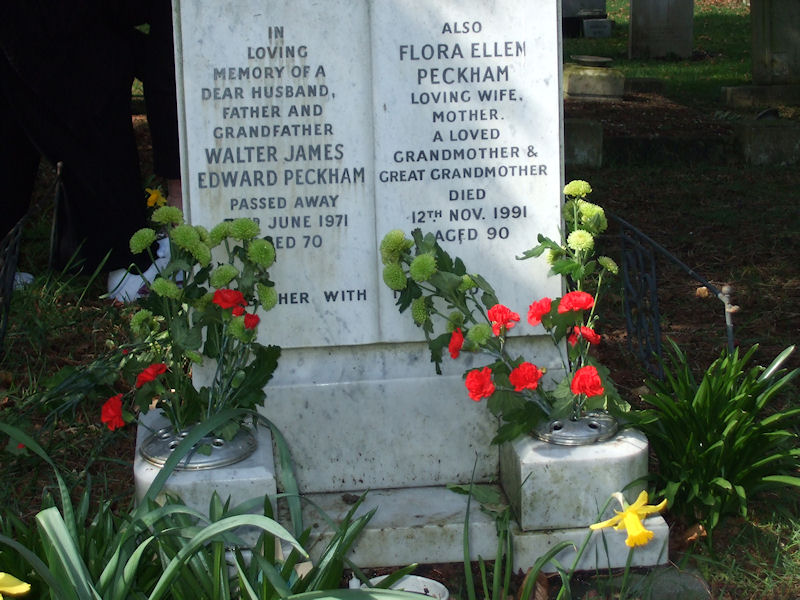 This family, through several generations, continues as a shining example of the ancient Biblical and Christian practice of caring for the earthly remains of their departed loved ones, tending the graves and adorning them with flowers on anniversaries, and it was a real joy to have them represented in our party both at Church and at the cemetery on Pascha morning. 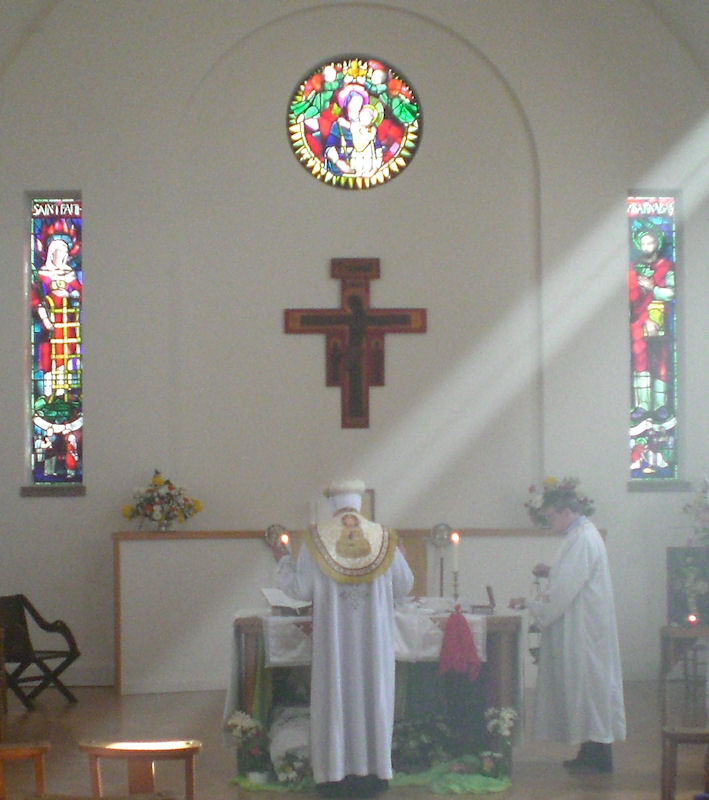 Afterwards, there was a buffet luncheon, during which Abba Seraphim announced that following the growth in membership he was raising the ministry at Portsmouth from a mission to that of a parish.

As part of that growth in membership we have held two adult baptisms in recent weeks.  Lacking a Portsmouth baptistery of our own we were very grateful for the kind hospitality of Immanuel Baptist Church, Southsea, in hosting both occasions.  Firstly Antony-Paul Holland was baptised… 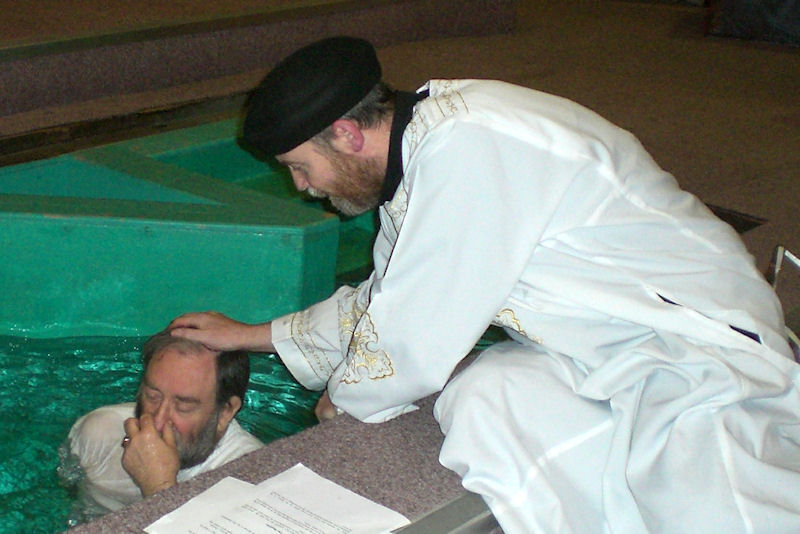 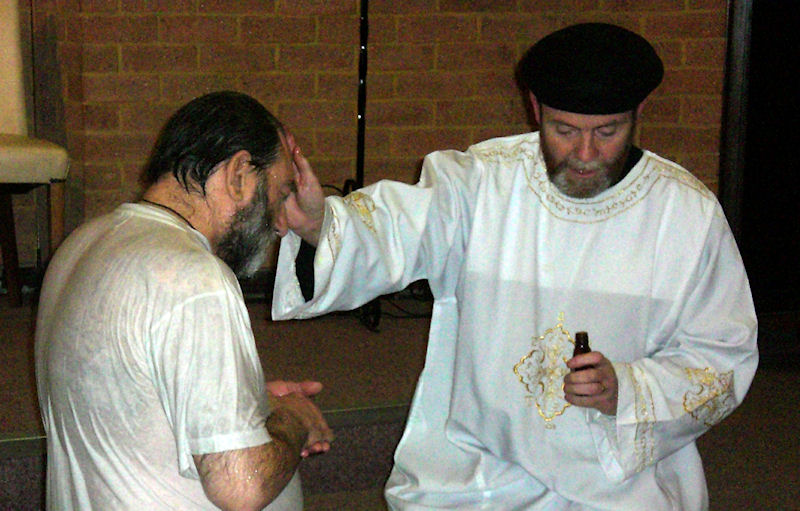 Then this past Sunday, 25th April, Daniel Malyon was baptised and chrismated  Although no photographs are yet available to include in this newsletter you can watch a film of the baptism on youtube:

Should you have any trouble locating these then go to the new British Orthodox Church website where you will see on the home page a video of Abba Seraphim talking about British Orthodoxy.  This is well worth a watch in its own right but also if you click on the youtube logo in the bottom right corner of the video it will take you to the same film on youtube where you will also find listed Daniel’s baptism along with other recent British Orthodox baptisms.

Please keep both Antony-Paul and Daniel in your prayers through these their early days and weeks as Orthodox Christians.

Please pray for Mary Judith and for her preparations towards a new British Orthodox South Coast mission to be based in Southampton under the patronage of Saint Polycarp – hopefully more news to follow in the coming months.

“Give rest to the souls of our fathers and our brethren.” Please pray for the departed on their anniversaries: Martha Coppin (8th May), Rosie Kryworuczka (17th May).

I pray that the blessings of this holy season of Pentecost may be yours.