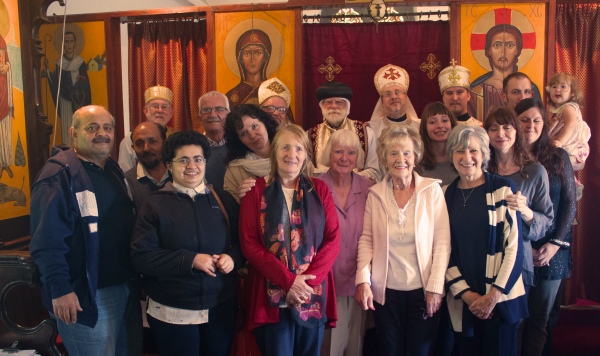 Abba Seraphim, accompanied by Deacon Daniel and Subdeacon James, visited the Church and congregation at Cusworth for the weekend of Saturday & Sunday, 30 & 31 August. After the Raising of Evening Incense on Saturday evening he dined with Father David Seeds and the clergy at Sprotbrough. The following morning they were joined by Father Peter Farrington, Archdeacon Alexander Astill and members of the Stoke Mission for the Sunday morning Liturgy. During the service Abba Seraphim presented Father David with a relic of Saint Hubert, Bishop of Liege (c. 656-727), one of the local church’s patrons. This was a gift of an anonymous donor and was rescued from his shrine in the Benedictine Abbey of  Amdagion (now St. Hubertus) in Belgium, when his relics “disappeared” at the Reformation. A parish luncheon in the Battie-Wrightson Memorial Hall followed after the service, during which Abba Seraphim spoke on “British Orthodoxy.”