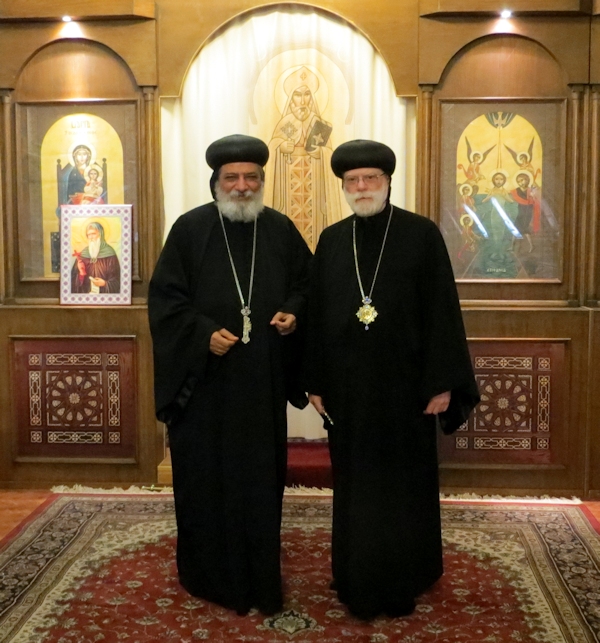 On 27 January Abba Seraphim arrived in Milan on a fraternal visit to His Grace Bishop Kyrillos, who – accompanied by some diocesan clergy – welcomed him at Malpensa airport. This was Abba Seraphim’s first visit to Milan since July 1996, when he had assisted at Bishop Kyrillos’ enthronement. The party drove to the Church of Santa Maria e Sant’ Antonio at Cinisello, where Abba Seraphim gave thanks for the journey. Here they were joined by engineer Salama Salama and his wife, who had acted as Abba Seraphim’s guide during his earlier visit.

Bishop Kyrillos conducted Abba Seraphim around many of his churches so that he could see the progress in the ministry over the past eighteen years. These included the Church of Sant’ Abramo at Vigevano, formerly a plant nursery, where the original prefabricated structures had been imaginatively adapted as a church, community hall and accommodation. The spacious Church of San Mina at Rho, had previously been a garment factory, whilst a garage in Milan now served as the spacious Church of San Giorgio with multiple chapels on two levels. An instruction class was in progress when the bishops arrived and Abba Seraphim spoke briefly to the youth who were gathered.  The extensive Monastery of San Shenouda at Lachiarella (near Meltoni) had formerly been a livestock farm but was now a spiritual oasis boasting many facilities for pilgrims, with eight resident monks.

The next morning engineer Salama and Fr. Raffaele Gebrail accompanied Abba Seraphim to the Basilica of Saint Ambrose, where he was received by Mons. Arciprete Biagio Pizzi, who conducted him round the shrine housing the bodies of St. Ambrose and the martyrs Gervasius and Protassius. Following this, they were received at the Biblioteca Ambrosiana by Mons. Dr. Franco Buzzi, the Prefect of the Library; Mons. Pier Francesco Fumagalli, the Vice Prefect & Director of Far Eastern Studies at the Accademia Ambrosiana; as well as Professor Giorgo Ricchebuono, President of the Cardinal Federico Borromeo Foundation. They were joined in their tour of the library and the Pinacoteca  by the Rector of the Universidad de Playa Ancha in Valparaiso, Patricio Sanhueza Vivanco, and the Pro-Rector of the Catholic University of the Sacred Heart, Professor Maria Luisa De Natale. They were also privileged to be conducted into the vaults, where they saw the strong room used to house the Library’s extensive collection of drawings buy Leonardo de Vinci, but also to have a private view of the excavated Forum of Roman Milan, preserved beneath the Library, which was to be opened to the public the next day. 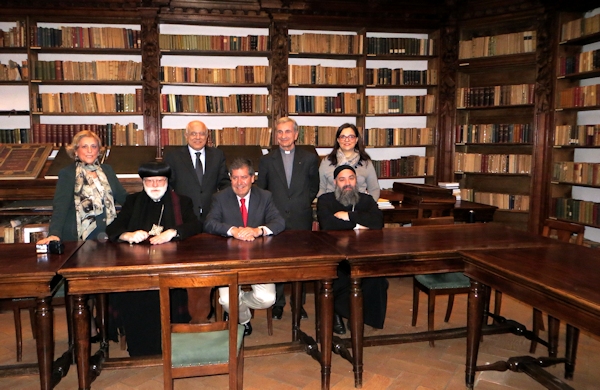 In the afternoon, accompanied by Father Antonio Ava Shenuti, Abba Seraphim travelled by train to Venice, where they were met by Bishop Kyrillos, who guided them round the extensive sight of the Coptic Cathedral of St. Marco at Campalto, on the north side of the Lagoon, facing Venice. The impressive towers, walls and roof structures are all in place and building will resume this spring.  The bishops dined in Venice where Abba Seraphim stayed overnight. The next morning he travelled down the Grand Canal to St. Mark’s Square but as the acqua alta (exceptional high tide) had covered the whole of the square, the Basilica was shut. After praying at the doors of the basilica, Abba Seraphim retraced his steps to Milan.