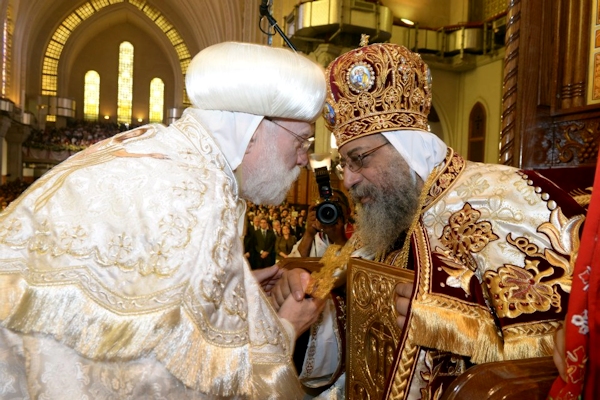 Abba Seraphim flew into Cairo just after midnight on 17 November. Providentially he was on the same flight as Their Graces Bishop Missael and Angaelos, so upon arrival at Cairo airport his passage through the usual formalities was expedited. From his base at the Sonesta Hotel, Bishop Angaelos was the member of the Holy Synod charged with organising the greeting of ecumenical guests and their transport to the hotel, all undertaken with seamless efficiency. Abba Seraphim was met by his hosts Mamdouh Abdou and Soheir, known affectionately by Abba Seraphim as ‘Om Shenouda’. Their son, Shenouda Mamdouh, the Egyptian Secretary to the British Orthodox Church was actually still in London on business.

After resting overnight, later that morning, Abba Seraphim met with Father Abraham Thomas, secretary of the Department of Ecumenical Relations of the Indian Orthodox Church as well as a number of other church leaders and ecumenical guests staying in Cairo. In the late afternoon he attended the arrival of His Holiness Pope Tawadros II at the Papal Residence in Anba Rueiss, where he prayed the Thanksgiving Prayer and offered incense in the Chapel of the Residence before receiving the greetings of the bishops and staff. In the evening Abba Seraphim attended a private dinner hosted by His Holiness the Catholicos of the East, Mar Basilius MarThoma Paulose II, at the Four Seasons Hotel in Giza.

Early on Sunday morning, 18 November, the Holy Synod gathered at the Papal Residence for the formal enthronement ceremonies. To the sound of drums and trumpets, the procession, led by chanting deacons, the bishops and metropolitans –  fully vested in their Eucharistic robes – led their new Pope into the Cathedral of St. Mark. Attended on one side by the magnificent figure of Metropolitan Pachomius, the locum tenens, and on the other by Bishop Sarabamoun, Abbot of the Monastery of St. Bishoy, the Pope was met at the shut west door of the Cathedral. Here the Archdeacon surrendered the great key to the Pope, who unlocked the doors so that the procession could pass into the packed cathedral. The Liturgy was already in progress, as the consecration of bishops and enthronement of Patriarchs takes place after the Pauline Epistle. Pope Tawadros, dressed only in a plain black cassock, sat alone on a dais in the midst of the khorus as the prayers were led by Metropolitan Pachomios with the participation of all the bishops. The new papal vestments were blessed by all the members of the Holy Synod as well as the Ethiopian and Armenian bishops present.  As the Pope received his crown from the hands of Metropolitan Pachomius, and was installed on the Throne of St. Mark, the congregation broke into spontaneous and prolonged applause.

As each bishop greeted the new Pope on his throne during the chanting of Axios, H.H. Mor Ignatius Zakka Iwas, Patriarch of Antioch, and the accompanying Syriac Orthodox bishops, chanted hymns and prayers of blessing and the Pope descended from his throne to embrace his frail brother Patriarch, who is now confined to a wheelchair  The Liturgy continued in its normal order, the whole service lasting about six hours. It was followed by a celebratory banquet in the crypt of the cathedral.