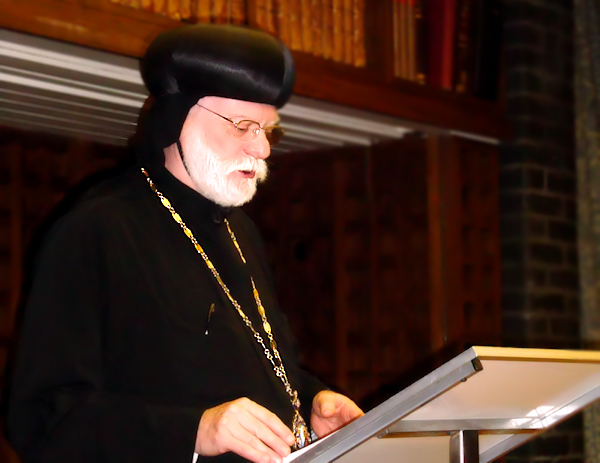 At the invitation of the Oxford University Orthodox Christian Student Society, Abba Seraphim gave a talk on “The Orthodox Heritage of Pre-Schism Britain” at Trinity College, Oxford, on 17 November. He began by pointing out that as a Metropolitan of the Alexandrian Patriarchate, within the Coptic and Oriental Orthodox traditions, the Great Schism of 1054 might seem to be somewhat beyond his remit, as it was a schism between two Chalcedonian churches which had been separated from that portion of the Orthodox Church for centuries. However, as an Englishman with canonical responsibility for a community of British Orthodox congregations he had a keen interest in Britain’s Orthodox heritage and what we may be learnt from it.

The Insular Church from its foundation was an integral part of the universal church, holding to a common faith and order. It withstood successive waves of persecution and when the Constantinian Peace of the Church was established, its hierarchs took their place in the counsels of the church. St. Athanasius the Great commended the British Church for upholding the Nicene Faith and very early we find it drawing on the support of sister churches to root out heresy.

Abba Seraphim examined the eastern origins of early British monasticism, especially links with Coptic Egypt; the role of saints and martyrs; the British enthusiasm for pilgrimages; the evangelism of the Irish saints and later Anglo-Saxon missions (Boniface & Willibrord); the evidence of liturgical and cultural links with other Christian cultures in Europe and the significant cross fertilisation of art and learning. He also highlighted the development of the Roman Primacy from one of honour to one of jurisdiction,  examining the traditions of Pope Eleutherius,  Augustine of Canterbury and Theodore of Tarsus and the gradual introduction of the filioque.

In concluding Abba Seraphim observed that the title of his talk was capable of two interpretations. The first might be simply to demonstrate that the Orthodox faith was manifested fully in the British Church prior to 1054, whereafter it gradually became more Romanised and fell into schism or worse; the second might be that the British Church in its first thousand years was not only fully Orthodox in its faith and order, as manifested by its full participation in the life and witness of the universal church, but that it made its own significant contribution to the faith, which  carried the Gospel to huge populations but enriched and renewed Christendom with its own unique character and perception.

Following questions and a vote of thanks, Abba Seraphim was invited to join representatives of the society for dinner at a local restaurant. 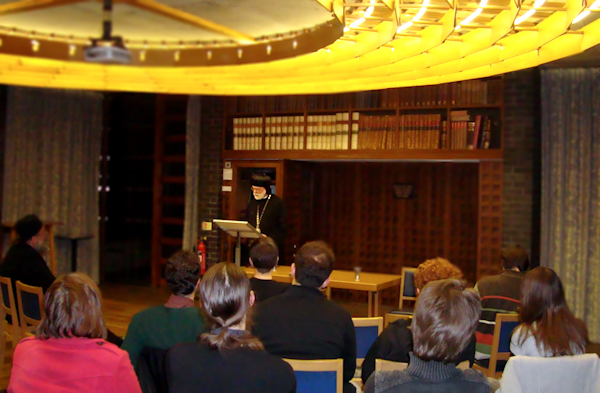