At the invitation of the Faculty of Theology of University of Malta and the Mediterranean Institute Abba Seraphim was invited to Malta to preside at an ecumenical service to commemorate the new Coptic Martyrs of Alexandria and to deliver two public addresses. 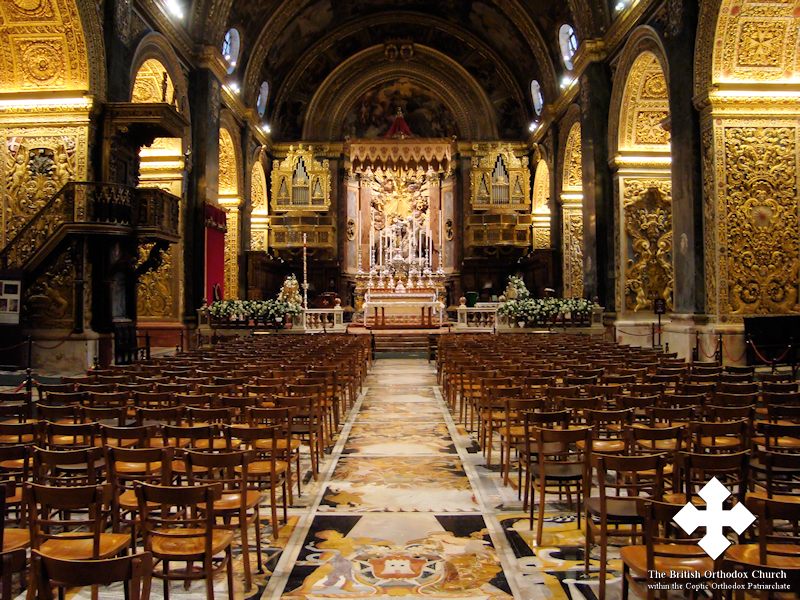 On 27 April, Abba Seraphim, arrived in Malta, where he was greeted by the Rev’d Dr. Hector Scerri, Head of the Department of Dogmatic Theology at the University of Malta and President of the Ecumenical Commission, Malta. He was driven to the Archbishop’s Seminary at Rabat, where he resided throughout his stay and was welcomed by the Rector, Fr. Jimmy Bonnici. 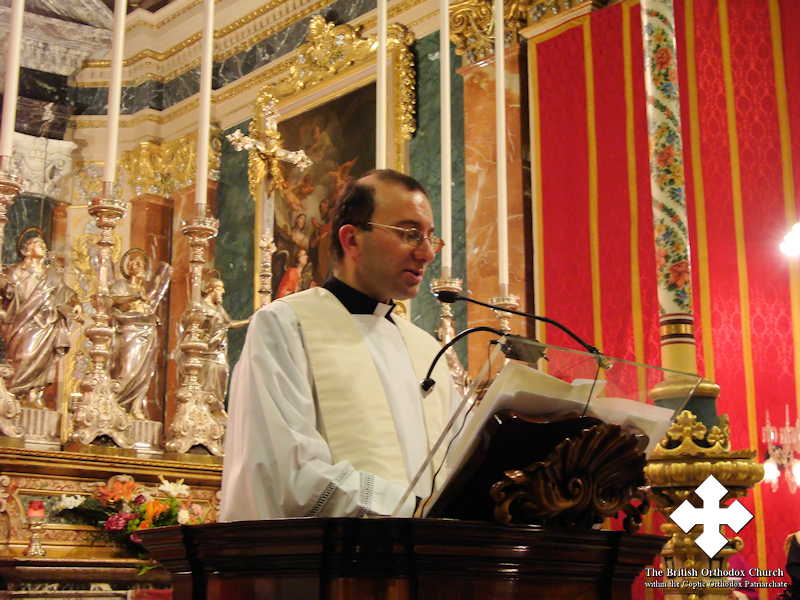 The following morning, Abba Seraphim and his party were taken by Miss Anna Caruana-Colombo, a member of the Ecumenical Commission, to St. Paul’s Grotto in Rabat where they were guided around the Church, Grotto and Museum by Mgr. John Azzopardi, Chancellor of St. Paul’s Collegiate Church at Rabat. Following this they visited the prehistoric stone temples at Mnajdra and Hagar Qim at Qrendi, where they were guided by Mr. Clive Cortis. Returning to Rabat they were entertained to lunch on behalf of the University of Malta by Professor Emmanuel Agius, Dean of the Faculty of Theology, and Dr. Simon Mercieca, Director of the Mediterranean Institute. 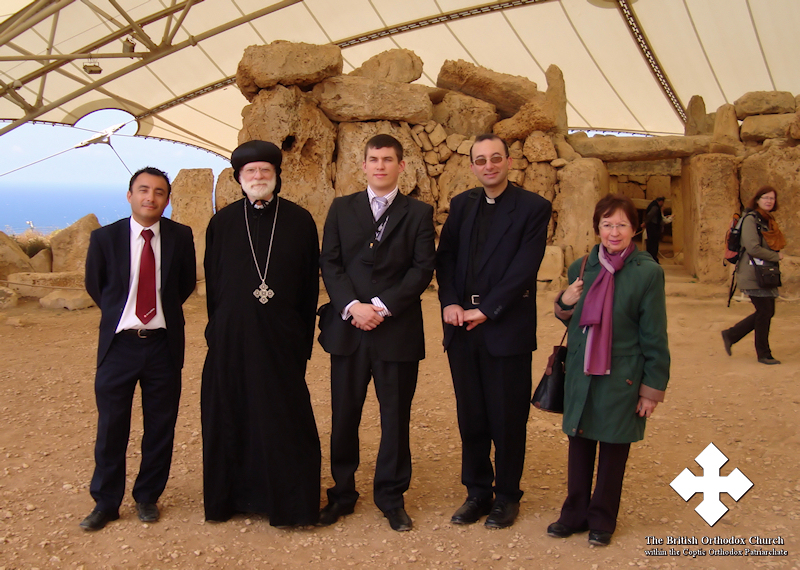 In the evening Abba Seraphim was welcomed at Mary Immaculate Collegiate Church, Conspicua, where he presided at an Ecumenical Service. In his message of welcome, the Rev’d Canon Joseph Mifsud, Archpriest of Conspicua, said, “Our intention … during this ecumenical prayer service is to commemorate the new Coptic Martyrs, killed through violence in recent months in the land of Egypt. As members of different Christian Churches, we come together in faith, hope and love to acknowledge as stated by Tertullian – that the blood of the martyrs generates new life among the members of the Body of Christ. We affirm strongly that the mutual recognition of the martyrs belonging to different Churches is a positive step on our ecumenical path.” The service was well attended and the rich musical contribution of the Chorus Urbanus under the direction of Maestro Dr. John Galea enhanced the dignity of the service. Abba Seraphim preached on the subject, “Building Bridges: A Witness to be borne jointly.” Following the service a reception was held in the beautiful Oratory of the Holy Cross.

More photos of this event can be found at the Cospicua parish website: http://www.cospicuaparish.org.mt 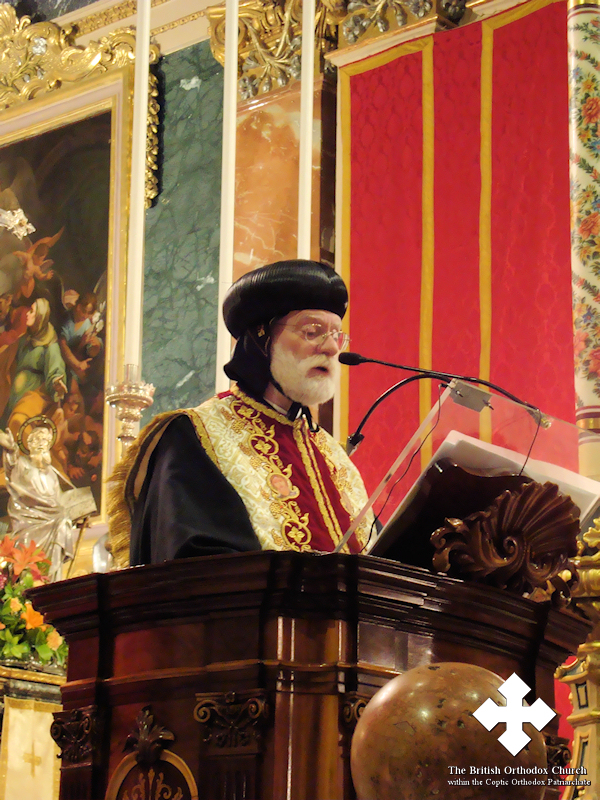 On 29 April Abba Seraphim and his party were taken by Mr. Carmel Grima, another member of the Ecumenical Commission, to Valletta to visit St. John’s co-Cathedral. Here there were conducted around the Cathedral and its Museum by Mgr. Laurence Mifsud. Following this they visited the Malta Emigrants Commission (Dar L-Emigrant) at Castille Place, Valletta, where they watched a film about the religious history of Malta, “The Sacred Island” before meeting the Rev’d Fr. Alfred Vella, the Director, and Mgr. Philip Calleja, its founder. Abba Seraphim was able to discuss his own experience of dealing with Asylum seekers and other immigrants in the UK. 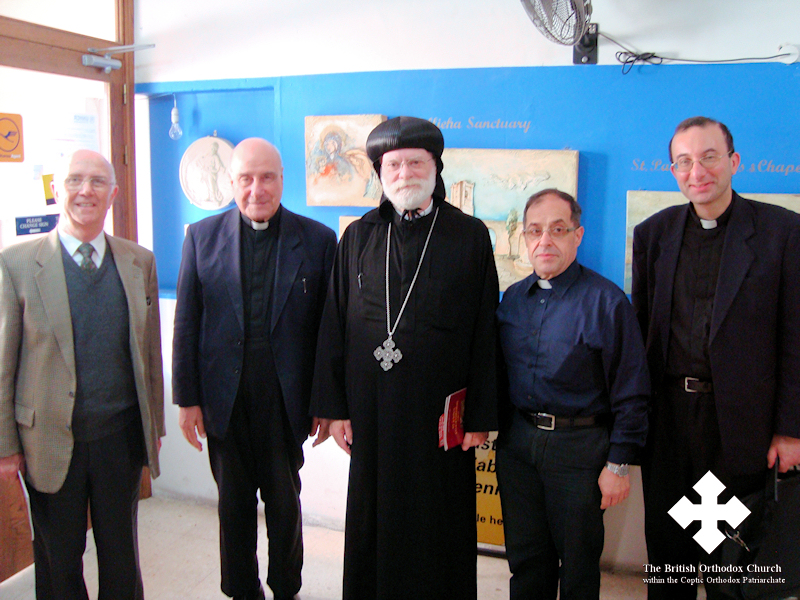 In the evening Abba Seraphim was welcomed at the Aula Magna at the Valletta Campus of the University of Malta, where, after welcome speeches by Professor Agius and Dr. Mercieca he delivered a public lecture “Believing in Dialogue: Preventing the Misuse of Faith.” Among the distinguished audience attending the lecture were His Grace Mgr. Paul Cremona OP, Archishop of Malta, and His Excellency Douglas W. Kmiec, United States Ambassador to Malta. Following the lecture there was a reception at the University followed by dinner for Abba Seraphim’s part hosted by the Foundation of Theological Studies. 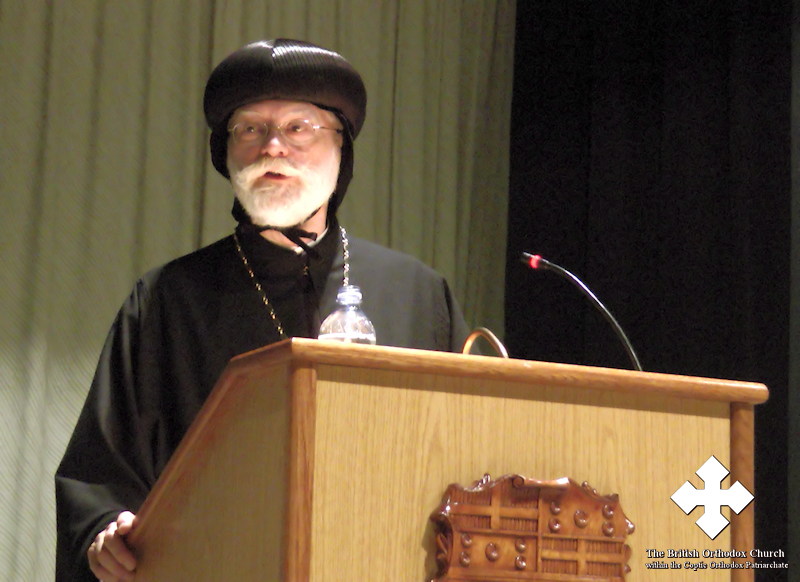 On 30 April Abba Seraphim and his party, accompanied by Father Reuben Gauci of the Diocesan Ecumenical Commission, made a courtesy call to the Archidiocesan Curia at Floriana, Valletta, where he was received by His Grace Mgr. Cremona and also met with Bishop Annetto Depasquale, Vicar-General of Malta. Abba Serhim presented Mgr. Cremona with published copies of some of his theological lectures and the Glastonbury Review and, in returned, received a Commemorative medal for the visit to Malta of H.H. Pope Benedict XVI in 2010. Taking his leave of Mgr. Cremona, Abba Seraphim travelled to Mdina, where he visit St. Paul’s Cathedral and was guided around the Cathedral by Mgr. Mifsud and the Museum by Fr. Edgar Vella. Returning to Rabat, Abba Seraphim made a courtesy call on His Excellency Mgr. Tommaso Caputo, Titular Archbishop of Otriculum and Apostolic Nuncio to Malta & Libya, where they discussed the humanitarian issues faced by the Maltese and other governments as a result of the large number of refugees leaving Libya and Tunisia. 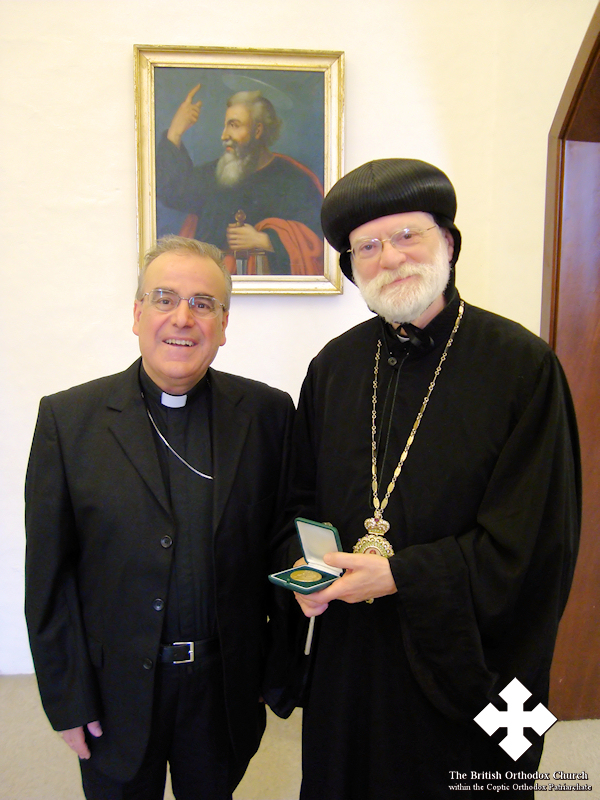 After lunch at the Archbishop’s Seminary at Rabat, Abba Seraphim said farewell to his hosts and returned to London that evening. 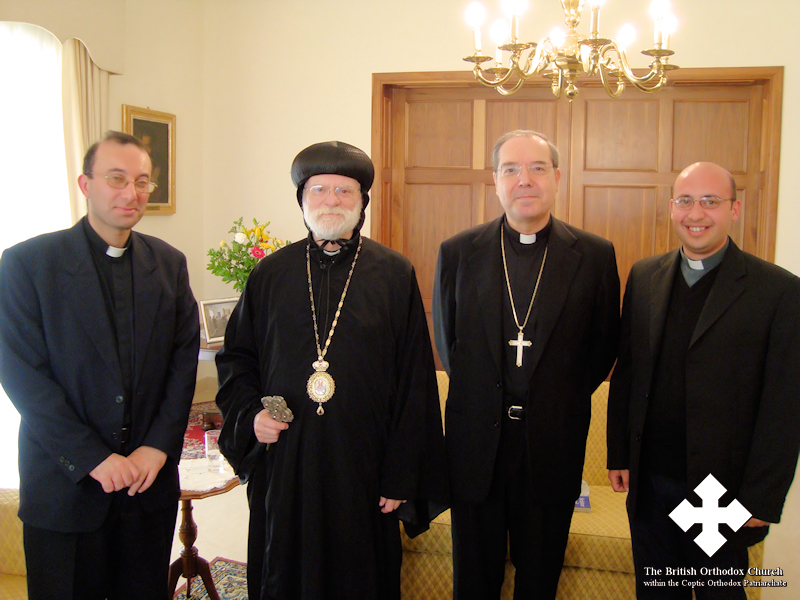