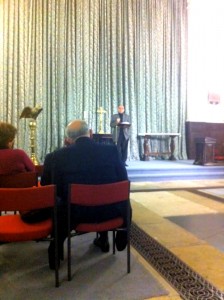 Abba Seraphim and Father Peter Farrington were among those who attended the annual Constantinople lecture on 25 November, which this year was given by Dr. Harry Hagopian at St. Mary at Hill, Lovat Lane in the City of London. The lecture is sponsored by the Anglican & Eastern Churches Association and followed Evening Prayer led by the Rector, Canon Flora Winfield.

Dr. Hagopian is a distinguished international lawyer as well as an active churchman who retains close links with the Christian communities in Jerusalem, where he was born. His subject was “The Armenian Genocide: A Way Forward?” and he addressed the historical and political issues arising out of Turkey’s denial as well as viewing it in relation to both the later Jewish and Ruandan genocides. Whilst recognising the significance of political considerations underlying the subject, Dr. Hagopian also viewed matters from a profoundly Christian perspective, seeing the resolution of the issue as part of the process of healing between nations and a source of hope for the future benefit of both Armenians and Turks.  The paper will be available on www.accc.org.uk the web-site of the Armenian Community & Church Council (ACCC) after this weekend or people can contact Dr. Hagopian directly on his own website: www.epektasis.net