Meeting of the Council of Oriental Orthodox Churches in the UK 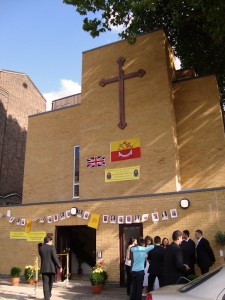 On Tuesday, 7th September, the members of the Council of Oriental Orthodox Churches in the UK met together at the Syrian Orthodox Cathedral of St Thomas, Acton, London. The tube strike might have been expected to deter the bishops and priests from attending, but in fact five of the member Churches were represented. Abba Seraphim and Father Peter Farrington represented the British Orthodox Church, and decided to drive to the venue, rather than rely on the over-stretched public transport system.

The meeting was chaired by His Eminence Mar Thimothios, of the Indian Orthodox Church, while His Grace Bishop Angaelos attended as President of the Council. Other members who were attending were: Father Vahan Hovhanessian, Father Shnork Bagdassarian, Father Antonious Shenouda, Father Shenouda Shenouda, Father George Joy and Father Ishak Tuza.

The main topic of discussion at the meeting was the Orthodox Education Day, which has been planned to take place on Saturday 9th October at the Nevart Gulbenkian Hall of the St. Sarkis Armenian Orthodox Church in Kensington from 10am. Members of the Council will be giving a number of presentations on the day, and His Grace Bishop Angaelos will provide a welcoming message as he is unable to be present. The Council plans to sponsor and organise four more such study days during 2011.

The council also discussed the forthcoming visit of Pope Benedict of the Roman Catholic Church. Members of the Council will be attending a service of Vespers in Westminster Abbey.

There was an opportunity for warm conversation after the meeting, while the members enjoyed the refreshments kindly provided by the Syrian Orthodox community. His Grace Archbishop Athanasios was travelling abroad but had insisted on generously providing hospitality for the Council meeting. Father Ishak was a very attentive host, and the Syrian food which had been prepared for us was very enjoyable.