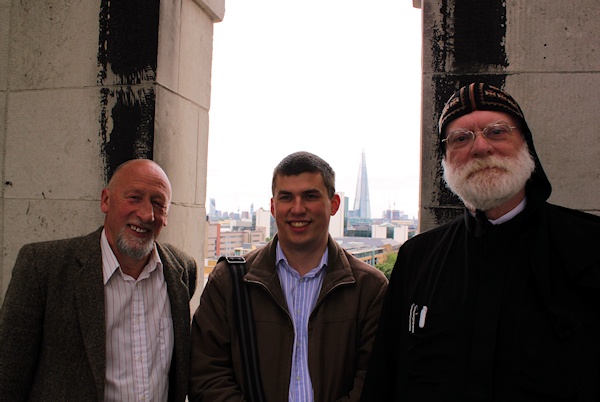 On 15 July, Abba Seraphim, accompanied by Subdeacon Wulfric (Paul) Ashdown and Trevor, attended the morning Eucharist at St. George-in-the-East, Shadwell, to celebrate the anniversary of the church’s dedication in 1729. It also provided a suitable opportunity for members of the local congregation to meet representatives of the British Orthodox Church, who have been worshipping at their church for the past few months.

Apart from a formal welcome from Canon Michael Ainsworth, the Rector, they were warmly greeted by all present and afterwards participated in a festive barbecue in the Rectory Garden, where they were later joined by the Archdeacon of Hackney (The Venerable Rachel Treweek) who expressed her delight that the Orthodox London Mission was worshipping at St. George’s Church and the Rev’d Janina Ainsworth, (also the Church of England’s Chief Education Officer), who had officiated at the morning service. After many months of uncertain weather and heavy rain, the weather remained dry and, as it was St. Swithun’s day, the hope was expressed that if it held off  the old legend of 40 days of dry weather might ensue. It also being Trevor’s birthday, Father Michael very kindly had the church tower opened for him so that his wish to climb it might be granted. In this he was joined by Abba Seraphim and Subdeacon Wulfric.