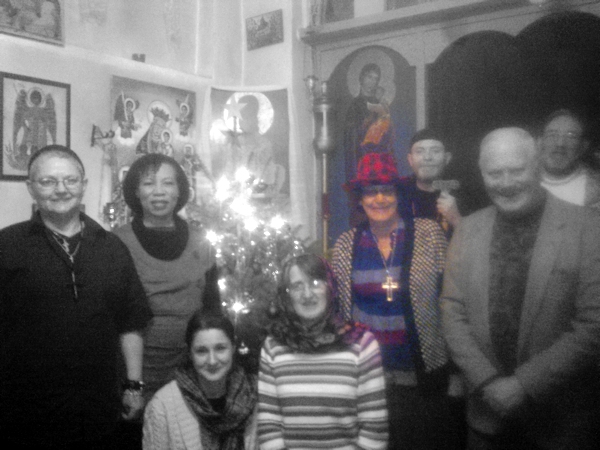 Bridget McConnachie came to Orthodoxy late in life, initially drawn to the British Orthodox Church through her friendship with Mary Goodchild. Bridget began attending services in 2011 and on her first visit to the Church of Christ the Saviour in Bournemouth was deeply impressed by the sense of peace she encountered immediately on entering the Church grounds. She continued to enjoy this peace throughout her many subsequent visits. She staunchly supported the Southampton mission from its beginnings in late 2011 but always saw the Bournemouth Church as her spiritual home and was baptised and chrismated into the Orthodox Church, at Bournemouth on Lady Day, 25th March, 2012. Bridget attended Bournemouth at least monthly and made sure she was there for the Advent Carol Service and for Palm Sunday and Holy Thursday, Good Friday and Pascha.

Bridget also supported other British Orthodox missions whenever she could, including Shadwell and Glastonbury. She was touched by the plight of Syrian Christians in their tribulations of these last several years and gave generously for the work of the Barnabas Fund in that area.

Following a fall early this year, hospital investigations revealed cancer and Bridget moved away from Southampton to live with her son and daughter-in-law in Windsor, where she was able to attend the Liturgy and receive Communion at Saint Andrew’s British Orthodox Mission. She was admitted to a hospice in May where Father Simon and Tasony Sheila Smyth were able to visit her and pray for her a few days before she died. Father Simon administered the holy unction. Although physically agitated and restless Bridget opened her eyes during the prayers and after the brief service was still and calm. One of the nurses explained that Bridget had spoken much of her faith and Church and priest. Bridget still wore her cross around her neck and was watched over in her room by a photo of the late Pope Shenouda for whom she had a deep love.