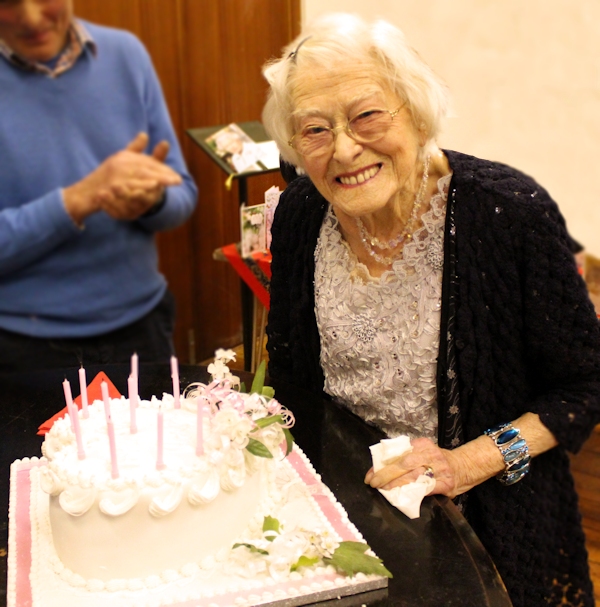 On 22 February Joyce Alice Edwards became the first recorded member of the British Orthodox Church to celebrate her hundredth birthday. (The previous longest lived member was the late Martha Coppin of Bournemouth, who died in her 99th year.)  Joyce Edwards was the first cousin to the late Metropolitan Georgius of Glastonbury (1905-1979) and mother to Metropolitan Seraphim of Glastonbury, so is well known to generations of church members. Previously a member of the Trotton Mission in Sussex she became an active member of the Charlton Parish when she moved back to London, following the death of her second husband, Peter Edwards in 1993.

Although physically frail and diagnosed three decades ago with heart failure, she lives in her own apartment in Charlton and has retained her mental acuity and independent spirit. Her good friend, Archimandrite Deiniol of the Wales Orthodox Mission summed things up when he wrote, “You know that I see you as a lady still young at heart, and I cannot imagine you as anything other than that.” As recently as 11 February she suffered a TIA (Transient Isceamic Attack) or mini-stroke but, by the Grace of God her indomitable spirit overcame that setback and she was able to attend all the events marking her birthday.

Birthday greetings were received from H.M. The Queen as well as from family and friends and from members of the Church both in Egypt and the United Kingdom. Foremost among these were personal greetings from His Eminence Metropolitan Bishoy of Damiette, “praying to our Lord to grant you sound health and long life since this is considered a blessing from our Lord” and from His Grace Bishop Kirollos of Milan, the Papal Deputy for Europe, who sent handwritten greetings to “Dear Joyce” and a reminder that “God walks each step of your journey with you … as you walk in life.”  Flowers, gifts and messages were received from all clergy of the British Orthodox Church as well as congregations and individual members. On the evening of her birthday she attended a reception and concert in her honour at St. Thomas’s Church, Charlton, and on the next day, Sunday, 23 February, she returned to attend the Divine Liturgy and to offer thanks to God for His many mercies throughout her long life. On both occasions she had to ceremonially cut birthday cakes. 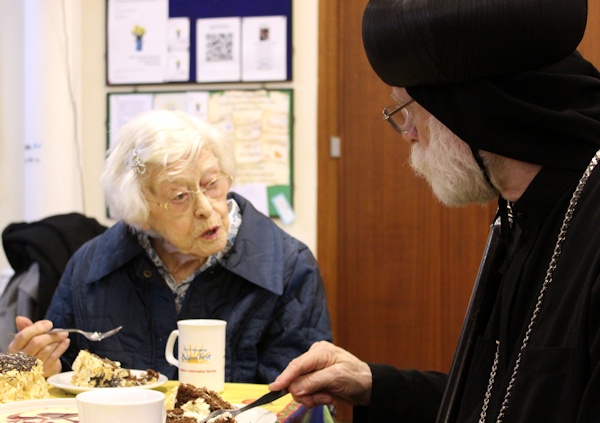