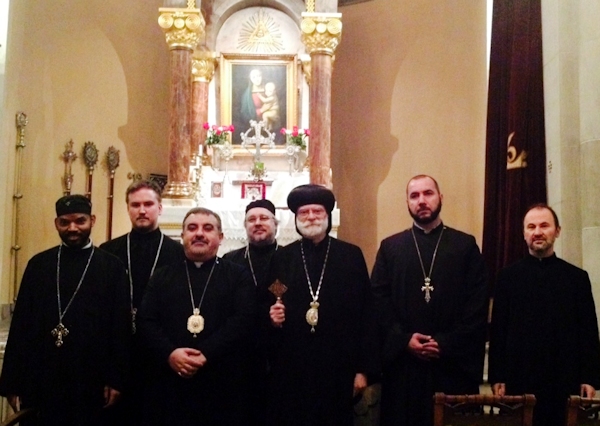 The second Orthodox Education Day, organised by the Council of Oriental Orthodox Churches (COOC), took place at St. Sarkis Armenian Orthodox Church in London on Saturday, 18 January. The topic for study was “Extra Biblical Sources of Faith and Tradition.” The day began with Morning Prayer in the Armenian Orthodox tradition. After a welcome by His Grace Bishop Vahan Hovhanessian, President of COOC, Abba Seraphim introduced the topic with a talk, “What is Tradition?” in which he drew a clear distinction beteen traditions or customs and Holy Tradition. Father Peter Farrington,  talking on “Tradition and Councils” examined the apostolic and earliest known local councils. After an excellent lunch Bishop Vahan explained the rich Armenian hymnic tradition with examples from the canon of sharakans, a sequence of eight hymnic chants sung in a fixed, logical succession. Deacon Daniel Malyon concluded the talks with his study of ‘The role of the canons in the formation of Orthodox Tradition”, giving some interesting examples from, the Alexandrian tradition.  Summing up, Abba Seraphim spoke of the broadness of Holy Tradition, extending not only over the Sacred Scriptures, but also encompassing worship and hymnology, as well as moral and ethical issues.