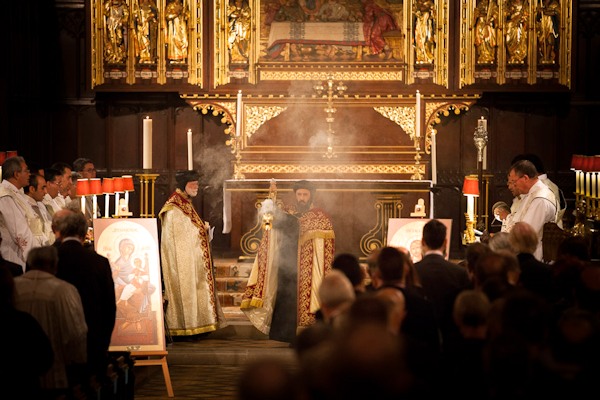 Abba Seraphim and Father Peter Farrington were among clergy assisting in the special Service commemorating the Coptic Feast of Nayrouz, hosted for the second year in succession at St. Margaret’s Church, Westminster. His Grace Bishop Angaelos presided and preached. Messages of welcome were made by the Rev’d Canon Andrew Tremlett,  Rector of St. Margaret’s; The Archbishop of Canterbury (read in his absence by the Bishop of Gibraltar in Europe) and H.M. The Queen (read by the Countess of Verulam, Lord Lieutenant of Hertfordshire). At the conclusion, addresses were given by Baroness Cox of Queensbury; the Right Hon. Alistair Burt, MP, Parliamentary Under Secretary of State for the Foreign & Commonwealth Office and the Right Hon. John Bercow, MP, Speaker of the House of Commons. The Church was full and a large number of clergy from other churches joined the procession as ecumenical guests.