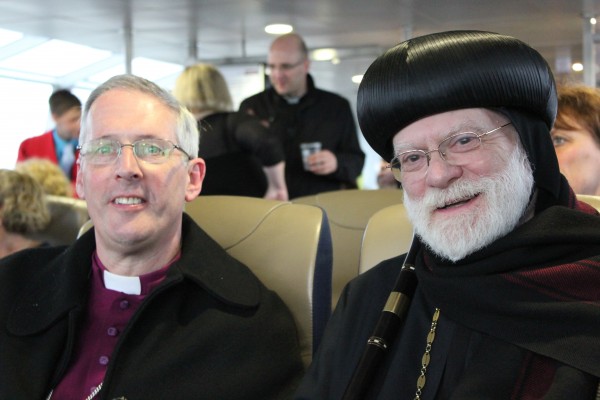 As the British Orthodox Church Secretariat is in the Royal Borough of Greenwich, Abba Seraphim was delighted to join in the celebrations of our local martyr, Saint Alfege. St. Alfege was Archbishop of Canterbury 1005-1012, having previously served as Abbot of Bath and Bishop of Winchester as a protégé of St. Dunstan. When the Vikings attacked and burned Canterbury, they took Alfege prisoner and attempted to ransom him for a huge sum of money. Declining to place his flock under this burden, he refused to be ransomed and was slaughtered during a drunken feast in the Viking encampment at Greenwich, where the parish church dedicated to him now stands. 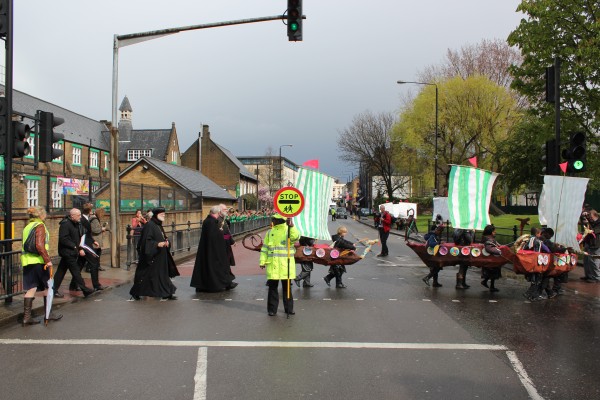 Joining the pilgrims for a commissioning service at Southwark Cathedral at midday, led by the Bishop of Southwark (The Right Rev’d Christopher Chessum), Abba Seraphim and the other pilgrims set off for Greenwich during heavy rain. Accompanying the main party were the Bishop of Bergen (The Right Rev’d Halvor Nordhaug) and representatives of the Scandinavian Churches in London. At this point they were also joined by the Archbishop of Canterbury and boarded a specially chartered pilgrim boat to travel to Greenwich by water. By the time they reached Greenwich the heavy showers were subsiding and the pilgrims were met at Greenwich Pier by various civic dignitaries led by His Worship the Mayor of Greenwich (Councillor Jim Gilman). 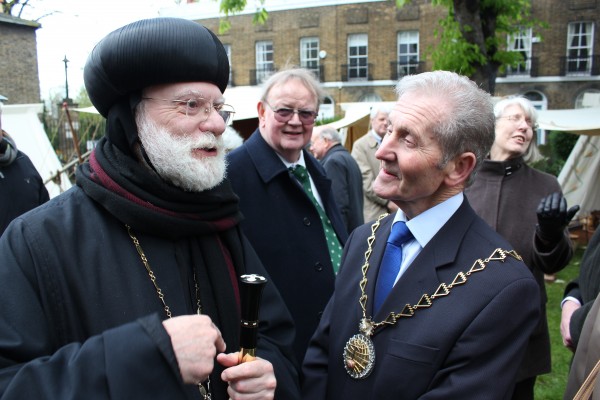 The first stop was at St. Alfege Primary School where the pupils greeted them with heartily sung songs and the Archbishop spoke to the pupils about the message of St. Alfege. The procession formed-up led by the pupils in home-made Viking longships which the Archbishop helped to steer through the town centre to the Parish Church. Here there was an Anglo-Saxon encampment by the Regia Anglorum who greeted the pilgrimns.

The festivities concluded with a Solemn Eucharist in St. Alfege’s Parish Church, at which the Archbishop presided and preached. The entire day was a very worthy commemoration of St. Alfege and brought together a diverse mix of pilgrims who had all come to honour his memory and perpetuate his message of the real worth of every human soul.