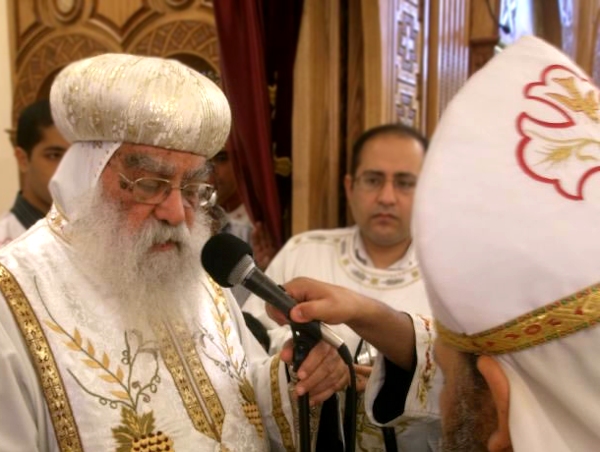 Abba Seraphim writes from Cairo: “The meeting of the Holy Synod which was held on 22 March was memorable for a number of reasons. In fact it was a joint meeting of the Holy Synod, the Maglis Milli (Coptic Community Council) and the Al Awkaf (Council for Church Endowments), so there were also a number of laity present. The session was opened by H.E. Metropolitan Bishoy, General Secretary of the Holy Synod, who spoke respectfully of the church’s loss of H.H. Pope Shenouda and, havimg circulated the 1957 Statutes governing the procedure to be followed after the death of a Pope, reminded us that our first task was to formally elect a locum tenens (sometimes called an Acting Patriarch) for the Church. By seniority this would fall to Metropolitan Mikhael of Assuit, but as he is a nonogenerian, he had humbly waived all rights and proposed that Metropolitan Bakhomious should preside. Whilst seniority is respected, the Synod is free to chose whoever it wishes from among its number. However, the unanimous choice of Metropolitan Bakhomious which followed owed nothing to his seniority and everything to the respect and affection in which he is held by those present. This election was made by 86 bishops and 20 members of the laity. As locum tenens, he will enjoy all the powers of the Pope with the exception of ordaining new bishops during the interregnum.

Assuming his position, the Metropolitan thanked the Synod for its confidence in him and expressed his unworthiness. He spoke of the critical times through which the church is passing and read from Ephesians IV: 1-6. He emphasised the necessity of living according to these verses and desired that we might live in love, peace and unity as we desire to know the will of God and to discover where the Lord is leading His church. Accordingly he encouraged everyone present to speak and be heard in that same spirit. There can be no room for individual interests, Pope Shenouda has left us with a precious treasure. The Church places us in a unique position; we cannot disappoint the people and we carry the responsibility together. It is our task to steer the ship of the church safely into the harbour.

The Synod lasted for five hours, 25 minutes, the longest session in recent memory, and many bishops and laity spoke constructively of their vision for the church’s future and addressed the many issues needing to be considered. It was a long, but fruitful meeting and there was a refeshing openness of debate. The next meeting of the Synod will be held on 27 March and Metropolitan Bakhomious indicated that, if necessary, it would meet twice a week to deal with all the required business. The public will be kept informed of its decisions and progress in the preparations for electing a new Pope by official statements issued from the Patriarchate.”

Abba Seraphim returns to London late on 23 March and will be attending the Memorial Service for H.H. Pope Shenouda III to be held at St. George’s Cathedral, Stevenage, on Saturday, 24 March at 3.00 p.m. He will be celebrating the Divine Liturgy as scheduled at Charlton on Sunday, 25 March.