Visit of Georgian Catholicos to London

His Holiness and Beatitude Catholicos Patriarch Ilia II of Georgia visited London to consecrate a new Cathedral for the 30,000 strong community of Georgian Orthodox living in the United Kingdom. Having established a Diocese of Great Britain and Ireland with Bishop Zenon of Dmanisi as its first hierarch, the Catholicos – assisted by several bishops of the Georgian Orthodox Church and His Eminence Archbishop Gregorios of Thyateira –  consecrated the Cathedral of the Nativity of our Lord at Rookwood Road, Clapton, London, N16 on Sunday, 6 February. The newly designated Cathedral was formerly known as The Ark of the Covenant and was built in 1892-5 to a design by Joseph Morris & Sons of Reading for the long extinct millenarian sect, the Apapemonites. Neglected after the war it was rented out to other church groups and at one time in the 1960s the British Orthodox Church used it on a monthly basis. 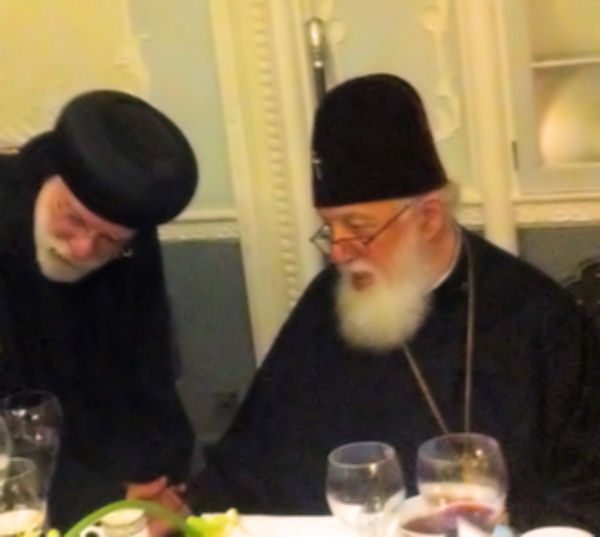 The same evening the Georgian Orthodox community held a reception at the Dorchester Hotel in London for the Catholicos, to which a number of ecumenical guests were invited. The Oriental Orthodox Churches were represented by Archbishop Athanasius of the Syriac Church,   Abba Seraphim of thev British Orthodox Church within the Coptic Orthodox Patriarchate and Father Snork Bagdassarion of the Armenian Apostolic Church. Representing the hierarchs of the Eastern Orthodox Churches were Archbishop Gregorios and Metropolitan Kallistos whilst the Right Rev’d. Geoffrey Rowell represented the Archbishop of Canterbury. In his short address Catholicos Ilia spoke movingly of the hospitality of the British people and expressed his respect and admiration for H.M. Queen Elizabeth II. He also touched on the difficulties of living next to a powerful nation and the pain of having Georgia’s territorial integrity compromised.

Abba Seraphim presented Bishop Zenon, who had been raised to archiepiscopal rank that morning,  with a copy of a rare booklet from the library of the British Orthodox Church, which marked the opening of the Ark of the Covenant in 1894 and described the symbolism of the building. Abba Seraphim spoke of the beauty of the church and its personal significance to him as he had himself been ordained there as a reader in 1965 and a subdeacon and deacon in 1967. He expressed his delight to know that this fine building was now consecrated as an Orthodox cathedral.