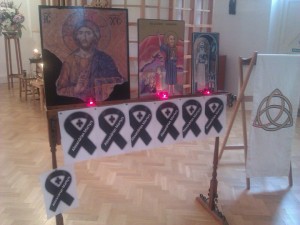 In all British Orthodox congregations this weekend special commemoration of the new Alexandrian martyrs were held and their names read out individually. These were held at noon following the normal Sunday service in order to coincide with similar services being held in Coptic churches throughout Europe. At Portsmouth the service was held on Saturday as the Divine Liturgy was already scheduled then as Father Simon Smyth celebrated the Sunday Liturgy in Bournemouth. The specially designed logo was reproduced and displated around the Portsmouth Church as well as attached to the portable ikon stands. At Cusworth Father David Seeds announced that the church had sent a donation of £250 to the Barnabas Fund to support Coptic Christians in Alexandria.

During his address at Bournemouth, Father Simon referred to the cost of blessings, “True blessing doesn’t come cheap.”  He also pointed to the example of the ascetic lives of the desert Fathers, to the inward pain of the Mother of God, Saint Mary (“my heart weeps when I gaze at Thee on the cross”) and spoke of the supreme example of the martyrs who paid the ultimate price for the great blessing of martyrdom.  “We all want to enjoy God’s blessing – but are we willing to pray the price our beloved Coptic martyrs in Alexandria have just paid?”  He emphasised that the Coptic Orthdox Church is par excellence the Church of martyrs. The memorial prayers for the martyred Copts throughout 2010 were prayed outside the Church building so as to give a greater public witness.  The Church entrance gate and notice board were covered in symbols of the Alexandrian Martyrs with requests for people to pray for them with their names listed. 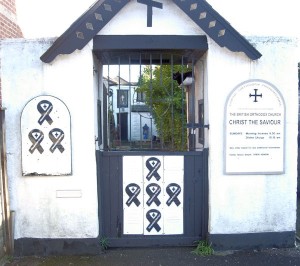