The January 2012 edition of Glastonbury Review carried an account of the June 2011 symposium: ‘Rediscovering Glastonbury Abbey Excavations, 1908-1979.’ This marked the half-way stage of a major research project by the Abbey in conjunction with the University of Reading to assess the historic excavation archive and surviving material assemblages. Here it was reported that our understanding of the sequence at the Abbey site has now been broadened by the recognition of Iron Age pottery, contemporary with the famous Lake Villages, in sufficient quantity to suggest settlement. Imported Byzantine amphorae sherds (the ‘Tintagel ware’ of earlier terminology), of a date-range centring in the sixth century, have now been recognised among pottery found by Dr Ralegh Radford, who excavated at the Abbey between 1951 and 1964, in the area of the later West Cloister. Some of these precious sherds are now on display in the Abbey Museum.

On Friday 20th April at 7.30pm in Glastonbury Library, Dr Cheryl Allum spoke to the Glastonbury Antiquarian Society on ‘Unlocking the evidence – Glastonbury Abbey Historic Excavations, 1904-79.’ Founded in 1886, and financed in part from the ‘grass keep’ (i.e. grazing rental) of the historic Glastonbury Lake Village site which it owns, the Antiquarian Society runs the town’s Lake Village Museum and is the major forum for new work in Glastonbury scholarship. Dr Allum, a Somerset native who also spoke at the 2011 symposium, is an extremely able young Research Assistant, who has dug at Bordesley Abbey, Worcestershire, and in the Hebrides, and has worked on stone building industries in Roman, Saxon and medieval contexts. She has also had the advice of author and former archaeologist Peter Poyntz-Wright (a Baltonsborough neighbour of the present writer) who as a young man took part in Radford’s excavations. Radford had never given up on the hope of publishing his findings properly and, following his death, his records were retrieved in 1999. It was a surprise to find that these were nearly complete, and, at risk to her eyesight, Dr Allum has deciphered his contemporary notebooks. In her talk, beginning with the little-known excavations of St John Hope in 1904, she outlined the sequence of the historic excavations, and discussed the ‘limitations and flaws in the archive, inherent in dealing with an historic excavation,’ with ‘descriptions of how these problems have been overcome.’ Former excavation trenches have now been related satisfactorily to modern ground-surveys, providing an invaluable resource for future excavators. Some success has been achieved in matching surviving finds to the records.

The most exciting new information she announced concerned the Saxon glass furnaces which Radford had discovered in 1957. These had hitherto been associated with historically recorded craft activity at the abbey under St Dunstan in the mid-tenth century. Radio-carbon dating of associated charcoal now suggests that they in fact date from the late seventh or early eighth century, at a time when glass-working is known at major churches of the Northumbrian ‘golden age.’ As reported in the local press (Central Somerset Gazette, 10 May 2012, p. 4), Prof. Roberta Gilchrist of Reading university, head of the Glastonbury project, has suggested a link to the building activity at Glastonbury traditionally ascribed to King Ine of Wessex (r. 688-726), and that specialist glass-workers may have come from Francia to work there. Fragments of brownish and blue-green glass are thought to come from both drinking-vessels and window glazing. The case for the importance of Glastonbury in the earlier Saxon period is now greatly strengthened. The presence of both Roman hypercaust (central heating) and roof tile, reused in the furnaces, is confirmed, reinforcing the hypothesis of a Roman villa in the area of the later Abbey buildings.

In a separate report (Mendip Times, May 2012, p. 60), Jane Bell, Abbey Curator, has now suggested that high quality decorated tile found at Glastonbury and dating from c.1250 may have been made locally by a tiler who previously worked at Henry III’s Clarendon Palace, near Salisbury (see Paul Ashdown, Little Spheres of Prophecy: Glastonbury, flooring, and the reign of Henry III, Glastonbury Review 121, January 2012, p. 79).

Less pleasing to report, a replacement sapling of a Holy Thorn planted on Palm Sunday on Wirral Hill to replace the tree attacked with a chain-saw in December 2010, as discussed in the BBC Radio 4 documentary The Mystery of the Holy Thorn (broadcast 4 April 2012) has now also been vandalised. 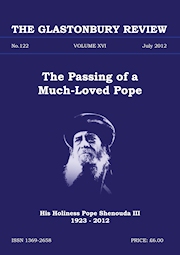