EGYPT: THE WORLD WATCHES AND WAITS

Since the beginning of the year, when a shocked world awoke to the news of the senseless bombing of the Al-Qidiseen Church in Alexandria, events in Egypt, and for the Coptic Orthodox Church, have moved with astonishing speed. Too often such atrocities against Christians only merit a few column inches, but on this occasion the world’s media turned its spotlight on this senseless and cruel outrage. The familiar explanation that it was not a sectarian attack, but merely the work of someone deranged could not easily be offered when the videos of eye-witnesses posted on the internet revealed jubilant Muslims crying ‘Allah Akbar!’ (God is Great).

Attempts by the Egyptian government to shift the responsibility for the attack on to outside forces, such as El-Qaeda or even Mossad damaged the government’s credibility both internationally and in the eyes of its own citizens. Public incitements to violence and sectarian protests in the weeks proceeding the attack left no-one in any doubt that even if the inspiration originated abroad, the perpetrators were home-grown. The suspicion that the security services were complicit was also strengthened by the knowledge that they had retreated out of harm’s way shortly before the explosion. When messages of sympathy and concern poured in from the world’s politicians and spiritual leaders,Egypt was once again wrong-footed by its recall of its Ambassador to the Holy See in protest at the plea of Pope Benedict that it should protect its Christians.

President Mubarak had only recently met with Pope Shenouda in the aftermath of the Omrania riots (see The Glastonbury Review No. 119) but now sent his two sons to represent him at the Coptic Christmas celebrations in the week following. With his usual courtesy and patriotism Pope Shenouda thanked the President for his sympathy and support.

World events were now moving rapidly and within another week, the protesters in Tunisia, succeeded in forcing President Ben Ali from office after nearly a quarter of a century in power. He fled to Saudi Arabia on 14 January but the spirit of revolution, once unleashed, began to spread and the uprising in Egypt that was to end Mubarak’s thirty-year rule began on 25 January. As it steadily gained momentum and protestors poured into Tahrir Square, the Church urged caution. It may have suffered greatly at the hands of the régime but it had learned to work with it and it knew that the most likely beneficiary of any power vacuum would be the militants and fanatics. The Church has always espoused peace and shunned violent protest, preferring a quiet diplomacy to right its wrongs. The suggestion since made by some observers, that Pope Shenouda was merely a client and beneficiary of Mubarak, was both false and malicious and cannot be supported by fact. As Coptic Pope he owes his position to Providence through the Divine Lot rather than any human appointment. When Mubarak came to power Pope Shenouda was already unjustly confined in St. Bishoy’s monastery as a prisoner and was to remain so for more than three years until his release. Since then he has continued to defend the rights of the Copts and to speak out against injustice and oppression, but with the voice of reason and moderation as befits his position. If anything, over the years his authority has been enhanced by its lack of political muscle and because it has been so firmly rooted in the Gospel. Even now, as Mubarak’s power ebbed away, the Pope spoke generously for his former gaoler, preferring to put the stability of Egypt and the unity of its people before all other considerations and generously remembering the times when Mubarak had heeded his pleas on behalf of the Copts.

The transition from Mubarak to the present was, as he predicted, a time of instability. For a brief period, with released criminals let loose to roam at will, the police force scattered and demoralised, even the Army had difficulty holding back the chaos which might yet engulf Egypt. Against this background the Christians have still suffered at the hands of extremists but they have found a voice and, with all Egyptians, wait anxiously for the outcome of future elections to parliament and the Presidency. The Church, very wisely, has held back from making too many statements. The future is uncertain and it encourages its people to play their part responsibly as loyal citizens.

The trial of Mubarak, his family and key supporters, will be a painful process through which Egypt needs to pass if it is to purge past wrongs; but the spectacle of the former President being ‘hung out to dry’ by a military Establishment, which collaborated and upheld the ancien régime is neither edifying nor proof of its democratic credentials.

In the midst of all this the Muslim Brotherhood is steadily consolidating its position and many are fearful that Egypt could become another Iran. Egypt is the key to the stability of the entire region and the Western democracies are right to offer moral and practical support as it rediscovers its identity. In doing this, the wellbeing of Coptic Christians and their ability to participate fully in all walks of national life in order to demonstrate their innate patriotism, is not only a visible sign that an injustice has been righted but that Egypt is able to offer a vision of true national unity which will inspire and enlighten the entire Middle East. 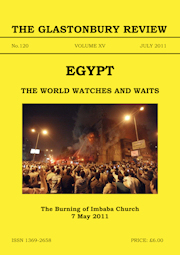