Father Peter Farrington in the Diocese of Milan 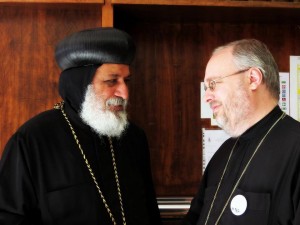 Throughout the month of October, Father Peter Farrington has been serving in the Coptic Orthodox diocese of Milan with the blessing of Metropolitan Seraphim. His Grace Bishop Kyrillos of Milan has already welcomed Metropolitan Seraphim to Italy on several occasions, and most recently earlier this year when he visited the diocese with three of the British Orthodox priests, Father Simon Smyth, Father David Seeds and Father Peter Farrington. Bishop Kyrillos had himself visited the UK to attend the 20th Anniversary Liturgy of the union of the British Orthodox Church with the Coptic Orthodox Patriarchate, bringing with him the greetings and blessing of His Holiness Pope Tawadros II.

Anba Kyrillos invited Metropolitan Seraphim to allow Father Peter to attend and speak at a Coptic Orthodox Missions Conference in Venice at the beginning of the month, with the intention that he then remain in Italy, staying at the monastery of St Shenouda, where he would provide a course of instruction to the priests and monks of the diocese in Theology.

Father Peter flew out to Italy from Gatwick airport at the end of September, being greeted at Milan Linate airport by Father Zaccaria and Father Bishoy of the Milan diocese. He traveled with them the thirty minutes to the Monastery of St Shenouda, where he began his visit by praying in one of the four churches in the monastic complex, before greeting Anba Kyrillos and offering the best wishes of Metropolitan Seraphim. There were already a number of visitors from Egypt staying at the monastery and intending to travel to the Coptic Orthodox Missions Conference the next day. Father Peter spent some time describing the life and mission of the British Orthodox Church with them, and answering many questions.

After an evening meal with Anba Kyrillos and Father Bishoy, Father Peter was taken to a local hotel where he spent the night. The next morning he was collected by one of the local Coptic Orthodox community and driven the short distance back to the monastery. A coach soon arrived and Father Peter found himself travelling with a large group of participants, towards the Catholic retreat centre on the edge of Venice, where the Coptic Orthodox Missions Conference was to take place.

The journey to Venice was over three hours of motorway driving, and half way to Venice a second coach joined us, containing Father Daoud Lamie and many other participants from Egypt. For an hour or so Father Peter was asked questions about the British Orthodox Church and responded using the microphone and loudspeaker at the front of the coach. Then, after a brief stop for refreshments, he joined the other coach and answered many of the same questions to another audience. 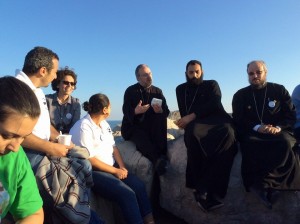 The coaches finally arrived at their destination towards evening, as the light began to fade. A simple dinner was served in the refectory, and then the first session took place in the main meeting room. The Conference took place from Wednesday evening until the following Monday lunchtime. Each day there were lectures on a variety of subjects, presentations from those working in various countries and engaged in Orthodox mission, as well as daily opportunities for liturgical worship, including the Liturgy itself celebrated each morning, and the Midnight Praises offered each evening. There were also various workshops and recreational activities organized throughout the week, including a wonderful boat trip to Venice itself, and prayers offered before the shrines of St Mark and St Athanasius.

One surprise was discovered on waking on Thursday morning. Pulling back the curtains of his room Father Peter was astonished to discover an uninterrupted view of the sea, and that the retreat centre was on the edge of the beach itself. A paved path through an attractive avenue of trees led on to the beach, where a stone jetty stretched out into the sea. 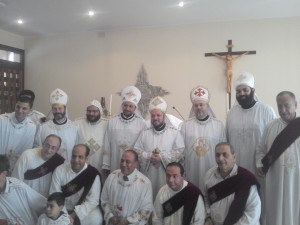 During the four full days of the conference Anba Kyrillos was able to attend from time to time, and was clearly much loved and respected by all those of his children in Italy who attended the conference. He celebrated the Liturgy on several occasions, and in his absence Father Daoud Lamie was the guiding force behind all the conference activities. Father Peter was warmly welcomed and always included fully in both the liturgical and conference events.

Father Peter spoke to the conference delegates on two occasions. He described the mission and vision of the British Orthodox Church, and he also addressed the issue of conducting Orthodox mission in Europe. His contributions were received with much enthusiasm. Many others presented the Coptic Orthodox missionary activities taking place in 25 countries in Africa and Asia. It is clear that over the last five years, and as a development of the social and pastoral ministries being conducted under the leadership of Father Daoud in Egypt, a missionary ministry has also been slowly being formed. Each presentation would include information about the social and religious situation in the country being described, about the ministry being conducted and the plans for further development. 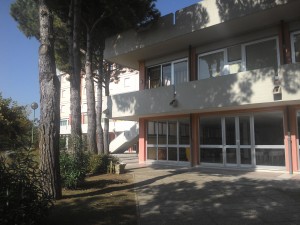 This missionary organization is still in its first stages. But already there is a structure which supports those working in these countries and encourages regular visits by groups of Orthodox Christians to work with those living in these mission centres. Father Peter was especially pleased to meet Father Solomon and Maro, his wife, who are working in Ghana. But there were also those present who were working in many other countries, or supporting those who were active there.

Each evening many of those present, from a wide age range, would gather to listen and to discuss aspects of the Christian life and of mission. It was a blessing for Father Peter to be included in all of these activities and to sit with Father Daoud Lamie, late into the night, surrounded by such dedicated Orthodox Christians.

The visit to Venice was of course a highlight of the conference. It included a boat trip from Jesolo, where the retreat centre was located, to St Marks Square itself, where the ferry docked. Father Peter prayed at the relics of St Athanasius, and joined the large group of conference participants in prayer before the shrine of St Mark.

On the last day of the conference the party from Egypt headed for the airport, or to a variety of European destinations, while Father Peter and many of the Italian participants headed back to Milan and the Monastery of St Shenouda. Father Peter recognised the importance of this conference, not only for the development of missionary ministry in the Coptic Orthodox Patriarchate, but also because of the contacts which have now been created and which are already bearing fruit in future possibilities of service.

As Father Peter arrived back at the monastery a second phase of his service in Italy now opened up. He was to spend several weeks with the priests and brothers of the monastery and the wider Diocese of Milan, providing a course of theological education which the fathers would attend each weekday. Father Peter had prepared many hours of material but almost immediately it became clear that the complexities of language, with fathers using Arabic and Italian, but being less fluent in English, meant that a new curriculum would have to be created as the days progressed.

Over the next weeks Father Peter developed a variety of materials which included simple lecture notes, bible study and discussion, to ensure that there was as much participation as possible. A wide variety of theological topics were considered, and most teaching was given spontaneously rather than with the detailed lecture texts that Father Peter usually prefers. In fact throughout his service in Venice and Milan, Father Peter was forced to rely on speaking without notes.

Father Peter was resident in a comfortable room in the monastery. This allowed him quiet and space to prepare PowerPoint slides for each day’s studies. But he was also able to visit several of the churches in the Diocese of Milan. He addressed two youth groups, speaking about prayer and the object of the Christan life. His words were translated by young Orthodox girls who performed excellently on each occasion. The youth were attentive and asked very good questions after each talk. 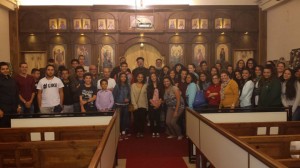 Each morning at the monastery Father Peter participated in the Liturgy, and after a few days Father Abraam, one of the monks, was assigned to pray with him and to teach Father Peter the Liturgy of St Basil in English. The opportunity to pray the Liturgy each day for such an extended period was a great blessing. Father Abraam was a patient teacher, and had just completed the liturgical training of the four newest priests in the Diocese. 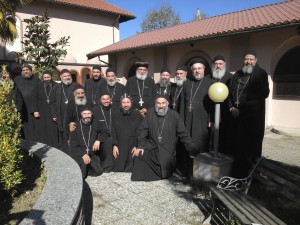 The unfeigned warmth and affection which all the priests and monks showed to Father Peter was a great encouragement. Indeed the love they show each other and that which their bishop, Anba Kyrillos, shows to all, is the foundation of the life of this Diocese. The monastery was also home at present to several priests and their young families so that it had the character of a Christian community. It was a blessing for Father Peter to sit at the table and share food with monks and priests, with priest’s wives, and with young children, all gathered together in love. Indeed Father Peter learned most Italian from the six year old son of one priest, who seemed to know intuitively what Father Peter was trying to say and learn to say when he pointed at something.

As this period of extended ministry abroad came to an end it was with a strong sense of having been among those who were and remain family in Christ. There were many warm hugs and an invitation to return soon and continue the theological education programme. Father Peter returned home, tired but encouraged. There is an open invitation for many of our British Orthodox friends and family to visit the monastery next year. As God wills, many of us may discover the warmth of welcome to be found there.