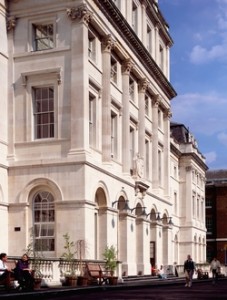 Father Peter Farrington has organised an intensive Coptic Language course which took place at King’s College, London. He reports on the successful event

The Coptic Language Summer School held at King’s College, London over the 5th-8th September was a complete success and even exceeded the expectations of those who participated, and myself who organised it.

Over four very intensive days of study a group of eight students progressed with growing understanding and enthusiasm through the first third of Thomas Lambdin’s Introduction to Sahidic Coptic through the inspiring teaching of Dr. Carol Downer, one of the few experts in Coptic teaching in the UK at the present time.

The group of participants included a variety of university lecturers from different institutions, several PhD students, and a handful of independent students such as myself. The class turned out to be ideally matched and we progressed through the studies at a very fast pace while also working together so that no-one was left behind.

We were fortunate to be able to hold the Summer School at King’s College, London, at the Strand campus, and some of the faculty and students at King’s were participants on the course. The excellent cafeteria facilities on site meant that we did not have to spend time each day looking for somewhere to have lunch together. The room we used was just the right size and had a view out over the Strand.

Many of the group were already competent in a variety of other ancient languages, but thanks to the teaching ability of Dr. Carol Downer even those of us whose willingness to learn was greater than our present grasp of Sahidic Coptic were soon able to translate increasingly complex sentences. Working through the exercises, both together in the class, and on our own in the evening, meant that the lessons we were learning took root.

By the end of the intensive course we were even able to begin to read passages from the Scripture with some understanding and each participant was able to measure the real progress they had made. Having studied the first third of our text book many of the class asked if a second and even a third such intensive week of studies could be organised in January and at Easter so that a more complete grasp of Sahidic Coptic could be acquired over the course of the year.

Some of the comments I have received from participants are as follows:

I absolutely loved the course – the atmosphere was friendly and open, and I felt welcome at once even though I am no language expert. It was just the push I needed to get me interested and motivated to continue pursuing Sahidic Coptic, and the encouragement and support I received has increased my love for the language even further.

I enjoyed the course immensely – and hope that the suggested January follow-up actually comes to fruition.
I very much enjoyed the course and found it extremely useful. The intensity of four days together was, I think, just about right and the group size and dynamic just enough to spur me on, without intimidation that can sometimes come with language learning. Carol is a wonderful teacher, and there were plenty of course materials provided so, overall, I have no suggestions for improvement. I’d certainly want to take another 4 day course as we discussed.
Plans are now underway for a second week of study in early January which will consider the next 10 chapters of pur text book.
From my own point of view, I am extremely pleased to have reached the end of the Coptic Language Summer School with a genuine grasp of the material we have covered. I shall certainly be reviewing it so that it isn’t lost, and will try to make use of it in the study of simple passages from Scripture. Having picked up Lambdin many times in the past, and put it down again because of difficulties studying on my own, I am very grateful that Dr Carol Downer has led me through these chapters.
Father Peter Farrington
BOC British Orthodox Chatham Coptic Dr Carol Downer Easter Fr Peter Farrington King's College Language London